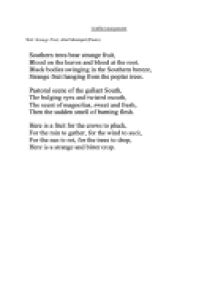 Ã¯Â»Â¿Conflict Assignment Text: Strange Fruit, Abel Meeropol (Poem) Abel Meeropolâ€™s â€˜Strange Fruitâ€™ uses an extended metaphor of fruit representing lynched African Americans during the conflict of systemic r****m between them and European Americans in the 1800s to 1900s. It contrasts the freedom taken for granted by Europeans, with the agonising horror African Americans experienced and explores relationships between morality and conflict. Conflict occurs when a lack of moral reasoning is present to consider motivations and effects of oneâ€™s actions. Meeropol successfully implies the fearful experiences of African Americans are ongoing as moral redress is ignored, identical to 2022. In the absence of moral reasoning and accountability, conflict continues because injustice must be addressed. So, until that occurs, conflict will be inescapable because immorality dominates. Meeropol effectively illustrates, African Americans' frightening experiences, as well as the battle to redress these in the absence of moral necessity, are continuous. In â€œPastoral scene of the gallant southâ€ and â€œThe bulging eyes and the twisted mouthâ€, bitterly ironic symbolism of a â€˜pastoral sceneâ€™ undermines typical expectations associated with a peaceful setting. ...read more.

This echoed in â€œBlack bodies swinging in the Southern breezeâ€ where harsh-sounding plosive alliteration of /B/ emphasises his idea that immoral conflict will persist, as humans its effects are eternal. This is identical in 2022 as we see ongoing effects of systemic r****m and need to redress past wrongs. That humans are fundamentally moral creatures, existing in a moral universe, is further explored in â€œSouthern trees bear strange fruitâ€. Meeropol implicitly draws upon symbolism of the Genesis Tree of Knowledge - the first accounting of humans as moral agents whose morality is divinely, not humanly, given. When harm is done or conflict has struck, in a moral universe, it is far from possible for this conflict to end without resort to moral reasoning. Humans bear â€˜strange fruitâ€™ in their murderous behaviour when they oppose the Judeo-Christian Godâ€™s moral order. Categorically then, this is indistinguishable from lynching, and Adam and Eveâ€™s refusal to follow the biblical Godâ€™s moral instructions. That wilful disregard must produce conflict is emphasised in the repetitive /bl/ of â€œBlood on the leaves and blood at the rootâ€ which invokes an auditory abundant spilling of blood, the moral order bleeds, once a cut is created, and no further healing, no loral redress is sought. ...read more.

And so â€œFor the crows to pluck, For the rain to gather, For the wind to suckâ€ and â€œFor the sun to rot, For the tree to dropâ€ The anaphoric use of the service preposition â€˜forâ€™ illustrates the idea that African Americans were merely vessels for use. They were never regarded as possessing common humanity. The personification of natural phenomena; wind and rain, poignantly reveals, for many European Americans, anything - even natural elements - could be more human than African Americans. The accumulation of these techniques further exhibits the inevitability of conflict in our immoral society. Abel Meeropol uses an extended metaphor of fruit to highlight the conflict between two races in the 19th and 20th centuries. He compares freedom of Europeans with agony African Americans experienced, ultimately conveying the idea that when moral reasoning and accountability are absent, conflict is eternal. Meeropol conveys that the experience of African Americans is ongoing, and we see this in conflicts in contemporary society. He reveals, absence of moral reasoning and accountability, triggers continuous conflict, and ongoing effects. Conflict is unavoidable when moral reasoning and accountability are absent in the world. How do our actions affect conflict to create eternality in our immoral universe? ...read more.