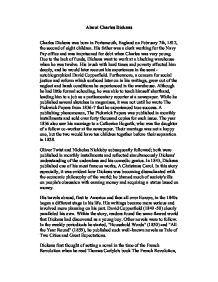 About Charles Dickens Charles Dickens was born in Portsmouth, England on February 7th, 1812, the second of eight children. His father was a clerk working for the Navy Pay office and was imprisoned for debt when Charles was very young. Due to the lack of funds, Dickens went to work at a blacking warehouse when he was twelve. His brush with hard times and poverty affected him deeply, and he would later recount his experiences in the semi-autobiographical David Copperfield. Furthermore, a concern for social justice and reform which surfaced later on in his writings, grew out of the neglect and harsh conditions he experienced in the warehouse. Although he had little formal schooling, he was able to teach himself shorthand, leading him to a job as a parliamentary reporter at a newspaper. ...read more.

His travels abroad, first to America and then all over Europe, in the 1840s began a different stage in his life. His writings became more serious and involved more planning on his part. David Copperfield (1849-50) clearly paralleled his own. Within the story, readers found the same flawed world that Dickens had discovered as a young boy. Other novels were to follow. In the weekly periodicals he started, "Household Words" (1850) and "All the Year Round" (1859), he published such well-known novels as Tale of Two Cities and Great Expectations. Dickens first thought of setting a novel in the time of the French Revolution when he read Thomas Carlyle's book The French Revolution, which was first published in 1839. He read this book faithfully every year, but used it sparingly in researching his novels. ...read more.

subject matter. Dickens' health started deteriorating in the 1860s. The fact that he had started doing public readings of his works in 1858 exacted even greater a physical toll on him. On June 9, 1870, Charles Dickens died and was buried in the Poet's Corner of Westminster Abbey. Though The Mystery of Edwin Drood was unfinished at the time of his death, he had written fifteen substantial novels and countless shorter pieces by then. His legacy is clear. While he pointed out problems within society�a blinding and mercenary greed for money, neglect of all sectors in society, and a wrong inequality, he offered us, at the same time, a solution. Through his books, we come to understand the virtues of a loving heart and the pleasures of home in a flawed, cruelly indifferent world. In the end, the lesson to take away from his stories is a positive one. Alternately insightful and whimsical, Dickens' writings have shown readers over generations the reward of being truly human. ...read more.