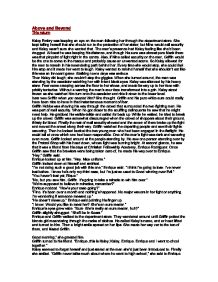 Above and Beyond - The return

Above and Beyond THe return Kaley Embry was keeping an eye on the man following her through the department store. She kept telling herself that she should run to the protection of her sister, but Nina would call security and Kaley wasn't sure she wanted that. The man's presence had Kaley feeling like she'd been drugged. At least he was keeping his distance, and though his aura was almost pure black there was that pinpoint of light right in the centre. Also, if Nina called security on the man, Griffin would be the one to come to the rescue and probably cause an unwanted scene. So Kaley allowed for the man to remain in his meandering path behind her. Every time she would stop, she could feel him stop and it made her want to laugh. Kaley wanted to remind herself that she shouldn't act like this was an innocent game. Stalking now a days was serious. Then Kaley did laugh; she couldn't stop the giggles. When she turned around, the man was standing by the escalator watching her with intent black eyes. Kaley was silenced by his heavy stare. Fear came creeping across the floor to her shoes, and made its way up to her face with prickly tentacles. Without a warning the man's sour face transformed into a grin. Kaley stood frozen as she watched him turn onto the escalator and ride it down to the lower level. here was Griffin when you needed him? She thought. Griffin and his pure white aura could really have been nice to have in that instantaneous moment of fear. Griffin Hobbs was shoving his way through the crowd that surrounded the two fighting men. He was part of mall security. When he got closer to the scuffling delinquents he saw that he might need help. He grabbed his walkie-talkie and called for back up. ...read more.

If we end up in h**l, so be it." "Then you don't love her." "Father, I have no love in me. When my mother died, I was glad to see her go because she as a traitor to her kind." "Why was she a traitor?" "She fell in love with a Wing and he saved her soul." "And you hate her for that?" "I never said that I hated her. I just don't feel any love for her, or anyone." "But you care about this Kaley; you must or you wouldn't want to spend all of eternity with er." "Yes, I care about Kaley, like you care about your w***e." The priest straightened. "She's not a w***e." "Kaley isn't an assignment. Not the usual kind anyway. I asked for her because I watched her nd it was even more appealing when my high school rival was assigned to be her Wing." "Then you're obsessed with her." Darien thought for a moment, "Yes, I'm obsessed. But let's talk about you right now. Is this oman more important to you than God?" "Nothing is more important to me than God." "Then there shouldn't be any confusion." "My... it's not that simple. I..." the priest didn't finish. "You're not in love with this woman. Whoever she is, she only wants to tempt you. 'Lead us ot into temptation,' right Father?" "What gives you the right to quote the Bible to me?" "I can see what's going on, when you can't. Don't look at this woman admiring her beauty, but ook through that. Take my hand." Darien held it out and the priest touched it. "Can you feel hat?" Darien asked as he let the evil rise to the surface. The priest jerked his hand away. "The next time you're with this woman, touch her hand and see if you feel that." Darien rose o leave. "Wait, your name? ...read more.

Griffin pulled out of the driveway. Kaley desperately wanted to tell Griffin about herself and how she was supposed to help arien; not because it was any kind of assignment, but because she cared about Darien and he thought that she might even love him. She knew that she wouldn't go to Christian ellowship Academy. That was something she couldn't do right now. She wanted to see arien again and scream and hit him for pretty much ruining Mariah's life. What if he'd stayed way himself and what if Mariah hadn't been so self-righteous? There were so many "what-ifs at the moment. What if Darien really had been a Wing instead of a Horn? Would God hav let Darien and Kaley find each other, because they were the same? They were both half-beeds, and the same unwanted creature. "You don't love me anymore, do yu?" Griffin asked, disturbing the silence. "I'm really confused at the moment. I don't want you to go away because I'm scared that I'll ake some sort of mistake, and then Darien will drag me down. I want to tell you this, so you now some of what is going on. When I told you that I spent the night at Darien's, you didn't ay a thing." "You said that nothing happened." "What if I was lying?" "I knew you weren't." "I guess because you were looking at my light." "I was." "It's not what it appears to be." "I know. It's much brighter than what I see. I always thought that Nina was the one who was he saintly one, not to say that she isn't, but..." "I'm different from Nina, Griffin." "I know." No, I was adopted." Griffin was silent for a long time. "Oh. How long have you known?" "Four years. I was told on my thirteenth birthday." "What was that like?" "I think I always knew that I was different, and it was like I was aware and dying. I felt like I s living a lie until they told me and then everything seemed to make sense." THE END ...read more.