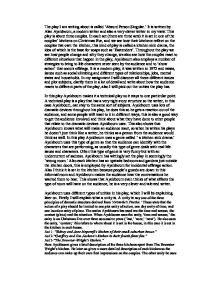 The play I am writing about is called 'Absurd Person Singular.' It is written by Alan Ayckbourn, a modern writer and also a very clever writer in my view. This play is about three couples. In each act (there are three acts) it is set in one of the couples' kitchens on Christmas Eve, and we see how their kitchens reflect on the couples that own the kitchen, this kind of play is called a kitchen sink drama, the idea of which is the base for soaps such as 'Eastenders'. Throughout the play we see how people change and why they change, we also see how the couples react to different situations that happen in the play, Ayckbourn also employs a number of strategies to bring to life characters never seen by the audience and to 'show action' that occurs offstage. It is a modern play, it was written in 1972 and raises, issues such as social climbing and different types of relationships, jobs, mental states and households. In my assignment I will discover all these different issues and plot subjects, clarify them in a lot of detail and write about how the audience reacts to different parts of the play, also I will pick out the unities the play has. In this play Ayckbourn makes it a technical play so it stays to one particular point. ...read more.

Usually the first impression for Jane and Sidney would be they get on well. With Geoffrey and Eva, Eva doesn't even reply so the first impression would usually be 'I wonder what's gone wrong here then?' Lastly there is Ronald and Marion; Marion isn't even there at the start its Eva talking to Ronald. My first impression was 'where is Marion? Why isn't she with her partner at the start of the act like all the other couples were?' I think Ayckbourn 'show's action' occurring offstage emphatically, he does this with Marion and Ronald at the start of act 3, he shows Marion's actions through Ronald. Every unity Ayckbourn uses will have an effect on every audience and make them think why he has used those unities in that certain way. In the 'time and season' it makes the traditional associations with Christmas be anticipated by the audience. The second unity he uses, 'context' is a surprise to the audience because it is set in a kitchen and it isn't the normal room people have as their main room and their usual venue for a party. The normal main room or party room would be the dining room or sitting room or most other rooms that the kitchen, a kitchen is the last place I would make my main room for a party or my main room. ...read more.

I think Ayckbourn did a tremendous job of making his play a realistic one, I think it is exactly like something that would happen in real life, it isn't just a play that is not likely to happen in a real life situation. It is a great kitchen sink drama; it is just as good as soaps such as Eastenders, Ayckbourn 'shows his action' rather than 'describe it'. Ayckbourn uses his dramatic devices to the best possible extent; he uses them when there needed and comes up with the best ideas for where it is set and everything like that. I think he does this so well because he doesn't just think of what seems good to him he thinks of what other people would think is good to, he thinks like a writer and as a member of the audience. Ayckbourn realized that an audience's imagination could do far better than any number of play writer's words. That is a sign of a great writer. All the dramatic devices have a great effect on the audience because there are visual devices emotional devices, so it appeals to all the audience not just part of the audience. I think Ayckbourn has created his play into a great piece of drama and I recommend everyone to read it because it is funny, clever, and sad, it has everything that makes a great piece of drama. By Will Powell ...read more.