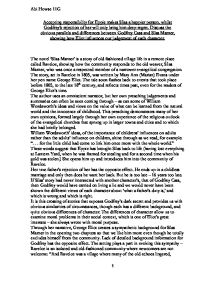 Accepting responsibility for Eppie makes Silas a happier person, whilst Godfrey's rejection of her will only bring him deep regret. Discuss the obvious parallels and differences between Godfrey Cass and Silas Marner.

The novel 'Silas Marner' is a story of old fashioned village life in a remote place called Raveloe, showing how the community responds to the old weaver, Silas Marner, who was once a respected member of a narrower evangelical congregation. The story, set in Raveloe in 1805, was written by Mary Ann (Marian) Evans under her pen name George Eliot. The tale soon flashes back to events that took place before 1805, to the late 18th century, and reflects times past, even for the readers of George Eliot's time. The author uses an omniscient narrator, but her own preaching judgements and summaries can often be seen coming through - as can some of William Wordsworth's ideas and views on the value of what can be learned from the natural world and the innocence of childhood. This preaching demonstrates many of her own opinions, formed largely through her own experience of the religious outlook of the evangelical churches that sprung up in larger towns and cities and to which she had briefly belonged. William Wordsworth' ideas, of the importance of childrens' influences on adults rather than the adults' influence on children, shine through as we read, for example: ". ...read more.

We also wrongly assume that because he is rich, he has everything he wants and is simply being ungrateful and selfish. This contributes to us feeling that Godfrey deserves the childless marriage he ends up with and that Silas Marner deserves to keep Eppie when Godfrey comes to take her back 16 years after he deserted her. This leaves Godfrey regretting what he has done and leaves Silas never happier, with his daughter, Eppie. The habits of the squirearchy are described as "a feverish way of annulling vacancy," which could be compared to Silas Marner's weaving because this 'habit' is also repetitive and is also a way of hiding from the emptiness of his lone life. In absence of all Silas used to have (faith, friends, an important position in the community,) Silas moves to an isolated village named Raveloe and retreats to anull vacancy in a way that we can understand. Although there is a parallel between the squirearchy's habits (gambling) and Silas' weaving, Silas' weaving is fair, hard work for money, whereas Godfrey's gambling is "frowned" upon. George Eliot makes us feel sorry for Silas but not Godfrey. She does this through flashing back to Silas' background and how he lost everything at Lantern Yard that fateful day. ...read more.

It was a sleeping child. These curls felt better than coins because they were indeed, part of a better treasure. Silas got all the pleasure from bringing Eppie up, Godfrey got all the regret. This was because Silas knew the real duty of a father. Godfrey thought proving materially was enough. This is the moral in this book - a father's duty is more than making sure your child has money. Eppie proves this to us when she rejects the offer to go and live with him just because he could provide better for her. She made this decision to stay with Silas alone, despite his telling her to choose as she wished. Deep down though, Silas was desperate to keep her, he loved her so much. He was the one who'd been there for her all of her life. Godfrey only wanted her because he knew now he couldn't have his own child with Nancy. Godfrey and Silas do have similarities; their own ways of nulling vacancy is one, but they also have very important differences: particularly their different ideas of fatherhood. It turns out Silas is right and Godfrey's rejection of his child brings him only deep regret, which Eliot's creation of sympathy for Silas and not Godfrey, makes us feel he deserved. Abi Howse 11G ...read more.