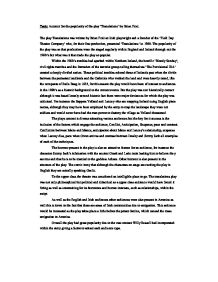 Account for the popularity of the play 'Translations' by Brian Friel.

Task: Account for the popularity of the play 'Translations' by Brian Friel. The play Translations was written by Brian Friel an Irish playwright and a founder of the 'Field Day Theatre Company' who, for their first production, presented 'Translations' in 1980. The popularity of the play was so that productions were the staged regularly within England and Ireland through out the 1980's but what was it that made the play so popular. Within the 1980's troubles had sparked within Northern Ireland, the horrific 'Bloody Sunday', civil rights marches and the formation of the terrorist group calling themselves 'The Provisional IRA' created a deeply divided nation. ...read more.

For instance the Sappers Yolland and Lancey who are mapping Ireland using English place names, although they may have been employed by the army to map the landscape they were not soldiers and would never have had the man power to destroy the village as Yolland threatened. The plays content is diverse attracting various audiences but the key for it success is the inclusion of the factors which engage the audience, Conflict, Anticipation, Suspense, pace and contrast. Confliction between Maire and Manus, anticipation about Maire and Lancey's relationship, suspense when Lancey dies, pace when Owen arrives and contrast between Doalty and Jimmy Jack all examples of each of the techniques. ...read more.

To the upper class the theatre was considered an intelligible place to go. The translations play was not only philosophical but political and didactical so a upper class audience would have found it fitting as well as entertaining for its humorous and human interests, such as relationships, within the script. As well as the English and Irish audiences other audiences were also present in America as well this is down to the fact that there are areas of Irish communities due to emigration. This audience would be interested as the play takes place a little before the potato famine, which caused the mass emigration to America. Overall the play had great popularity due to the vast content Willy Russell had incorporated within the story giving a factor to attract each audience type. ...read more.

This is a response to a question that asks about the popularity of the play 'Translations' by Brian Friel, and why the candidate themselves believe the play to be considered such a successful one. The answer given appears very unconvincing ...

This is a response to a question that asks about the popularity of the play 'Translations' by Brian Friel, and why the candidate themselves believe the play to be considered such a successful one. The answer given appears very unconvincing at times and also poorly evidenced (with regard to actual quoting from external sources, which is a good practice for any question on popularity). There is a sound understanding of the events of the novel, but only a surface-level understanding of the connotations and the sensitively interwoven themes and allegories that also exist. It is nice to see that there is a clear attempt at answering the question, but even though is is on the short side, it does address a number of different audiences and the cross-cultural appraisal the play has received (very implicitly) and thus has somewhat considered the play's popularity, though more explicit means would harbour more marks.

The Level of Analysis here is average, but the extent to which it explicitly answer the question is limited. It could also be argued that the analysis is not a sufficient depth to gain higher than a C grade. This is because the candidate comments on that which can be considered obvious, such as why a certain audience may enjoy certain parts of the play, rather than crossing these demographics over and such. I do however, love the attention to detail with regard to attitudes and values of the audiences of the time. Though sometimes unconvincing, the recognition of attitudes to theatre in all ranks of society improves this answer on the basis that there is evidence of contextual appreciation that some candidate miss. If only this level of attention to detail was used throughout the rest of the answer, this candidate could easily see themselves achieving a whole grade higher.

The Quality of Written Communication needs some work. There is a frequent mishandling of the English language with erroneous uses of grammar, spelling and punctuation, though not to the extent the the answer the candidate is trying to write becomes ambiguous of difficult to understand. I would advise that the candidate reads and re-reads their work after every paragraph, to ensure clarity in their written expression.