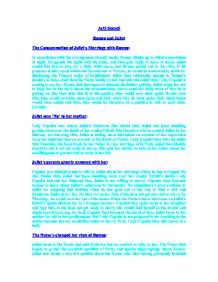 Act3 Scene5 Romeo and Juliet The Consummation of Juliet's Marriage with Romeo: In accordance with the arrangement already made, Romeo climbs up to Juliet's apartment at night. He spends the night with his bride, and then gets ready to leave at dawn. Juliet would like him to stay for a little while more, but Romeo points out to her that, if his presence is discovered within the boundaries or Verona, he would be sentenced to death for disobeying the Prince's order of banishment. Juliet then reluctantly assents to Romeo's decision to leave. Just then the Nurse hastily comes and informs Juliet that, Lady Capulet is coming to see her. Romeo had thereupon to descend the ladder quickly. Juliet urges her not to keep her in the dark about his circumstances, but to send her daily news of how he is getting on. She then asks him if, in his opinion, they would ever meet again. Romeo says that, they would certainly meet again and that, when they do meet again, their misfortunes would have ended and that, they would be therefore in a position to talk to each other joyously. Juliet says 'No' to her mother: Lady Capulet now enters Juliet's bedroom. She thinks that, Juliet has been shedding profuse tears over the death of her cousin Tybalt. She therefore tries to console Juliet in her distress, not knowing that, Juliet is feeling more distressed on account of her separation from her husband than on account of the death of Tybalt. Lady Capulet then informs Juliet that Thursday has been fixed, by her father for her marriage with Paris. Juliet then bluntly says that, she is not yet ready to marry. She asks her mother to inform her father about her unwillingness to get married so early in her life. Juliet's parents greatly annoyed with her: Capulet now himself comes to talk to Juliet about her marriage which he has arranged. ...read more.

Juliet has tears running down her face. Capulet says, "Get thee to church a Thursday or never after look me in the face." He grabs her by the hair and lifts her to her feet; they are stood in the middle of the stage. He says, "My fingers itch" and he clinches his fist ready to hit Juliet. Then the nurse, who is wearing a white gown, runs and grabs Capulet arms and says, "God in heaven bless her. You are to be blamed, my lord, to rate her so." The nurse tries to help and calm Capulet down but it is not working. Capulet replies saying "Hold your tongue," he points his finger at the nurse. Then Capulet says, " O God I am good even," here Capulet points towards the door to imply for the nurse to leave but it is quite hard for the nurse to do this because she has nursed Juliet since she was a baby and thinks of Juliet as her own child. Then the nurse says, "May not one speak?" and then storms loudly off stage. At this point Capulet has let Juliet go and Juliet is in shock. Capulet says," Having provided a gentleman of noble parentage", at this point Capulet is mocking Juliet. Capulet is walking up and down the stage in such a rage. He is shouting and stamping his feet as he walks. When Capulet finishes his line he storms off stage shouting, "I'll not be forsworn". As he goes he knocks off all of Juliet's belonging which are on her dressing table. Juliet then turns to her mother who is crying and now sat on the bed. Juliet is also still crying but not as much now her father has left. She then goes and sits next to her mother; at this point there is no sound- it is silent. Juliet begs her mother to, "Delay this marriage." But her mother has none of it and storms out. Submitted by, Udit Aggarwal 10Y ` ...read more.