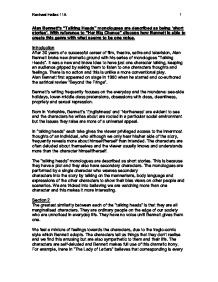 Alan Bennett's &quot;Talking Heads&quot; monologues are described as being 'short stories'. With reference to &quot;Her Big Chance&quot; discuss how Bennett Is able to create this genre with what seems to be one voice.

Alan Bennett's "Talking Heads" monologues are described as being 'short stories'. With reference to "Her Big Chance" discuss how Bennett Is able to create this genre with what seems to be one voice. Introduction After 30 years of a successful career of film, theatre, satire and television, Alan Bennett broke new dramatic ground with his series of monologues "Talking Heads". It was a new and brave idea to have just one character talking, keeping an audience gripped by asking them to listen to one characters thoughts and feelings. There is no action and this is unlike a more conventional play. Alan Bennett first appeared on stage in 1960 when he starred and co-authored the satirical review "Beyond the Fringe". Bennett's writing frequently focuses on the everyday and the mundane: sea-side holidays, lower-middle class pretensions, obsessions with class, cleanliness, propriety and s****l repression. Born in Yorkshire, Bennett's 'Englishness' and 'Northeness' are evident to see and the characters he writes about are rooted in a particular social environment but the issues they raise are more of a universal appeal. In "talking heads" each take gives the viewer privileged access to the innermost thoughts of an individual, who although we only hear his/her side of the story, frequently reveals more about himself/herself than intended. The characters are often deluded about themselves and the viewer usually knows and understands more than the character himself/herself. The "talking heads" monologues are described as short stories. This is because they have a plot and they also have secondary characters. ...read more.

This tells the audience that she is insecure and is used to being exploited by men. Lesley's use of clich�s shows her literal understanding. When she was talking to spud she said "Thank you, kind sir, but I didn't fall off the Christmas tree yesterday". This shows that she doesn't have a very good understanding as it is the wrong clich� and she should have said 'I wasn't born yesterday'. Lesley also repeats certain words which lead us to believe that she has a limited vocabulary. She says "chaio" a lot and "transpired". She is trying to give the impression that she is better educated than she actually is and she is trying to make herself sophisticated. However, by repeating words as many times as she does, it actually just lets other characters and the audience know how limited her vocabulary is. Section 4 Bennett builds Lesley's world by introducing characters through reported conversation and this is similar to how characters are introduced in a short story. Lesley is the only character we see but by taking on the different registers of different characters, we as an audience are fooled into believing we are watching more than one character. We also get to see how Lesley is perceived by other characters as when she adopts different registers to introduce different characters it shows the audience how the character said the lines. When she is saying Rex's lines for example, her tone of voice becomes abrupt and it shows that he is rude and difficult. ...read more.

The audience cant understand how she can be taken in by this rubbish and they feel sorry for her. Another example is when she tells us about the night she spent with Gunther. "Were you pleased with my performance?' He said, 'Listen. If someone is a bad actress I can't sleep with her. So don't ask me if I was pleased with your performance. This is the proof.' There is a close-up of Lesley when she says "He's a real artist is Gunther." The audience feel sorry for her because they can see her naivety. They can see that she doesn't know he is just trying to take advantage of her and this makes the audience feel sympathetic towards her. Conclusion Bennett creates a short story genre with just Lesley's voice in 'Her Big Chance.' He does this my making the audience aware of her self delusions. By Lesley using different tones of voice and body language we can really see what people think of her. She takes on other characters and this shows the audience what they are like without actually seeing them. The plot unfolds by Lesley introducing new characters. In a short story, the characters would introduce themselves but in a 'Talking Head' Lesley has to do it. In a short story, the focus is as much on the setting and the costumes as it is on the person that is speaking. In 'Her Big Chance' everything is plain so we can focus on Lesley as she is the only person speaking. She keeps us interested by always introducing new characters and using body language and tone of voice to express herself. ?? ?? ?? ?? Rachael Hallas 11A 1 ...read more.