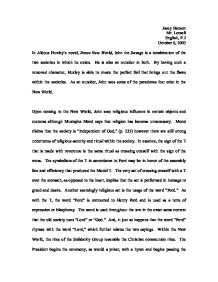 Jacey Hanson Mr. Lomeli English, P.2 October 6, 2003 In Aldous Huxley's novel, Brave New World, John the Savage is a combination of the two societies in which he exists. He is also an outsider in both. By having such a removed character, Huxley is able to create the perfect foil that brings out the flaws within the societies. As an outsider, John sees some of the paradoxes that exist in the New World. Upon coming to the New World, John sees religious influence in certain objects and customs although Mustapha Mond says that religion has become unnecessary. Mond claims that the society is "independent of God," (p. 233) however there are still strong undertones of religious sanctity and ritual within the society. In essence, the sign of the T that is made with reverence is the same ritual as crossing oneself with the sign of the cross. The symbolism of the T in accordance to Ford may be in honor of the assembly line and efficiency that produced the Model T. ...read more.

which when compared to the appearance of many Bibles, is strikingly similar. The usage of word "limp" to describe the book implies that it has been read numerous times and is an old, cherished book. And by simply stating that "large golden T's" are stamped on the book signify importance and even a bit of extravagance. The placement of the book is also significant because by being "under the window" (p. 217) it allows the book to bask in the light. In the Christian religion, light is symbolically linked to the truth and purity; therefore, if the two societies are as similar as they seem to be, it is only fair to assume that My Life and Work is a well-read religiously themed book that is basking in the purifying light. John enters the new with the idea that it is a perfect society. Linda had constantly raved about the New World and glorified that "nobody was ever alone there" (p. 137). However, John loses his identity as a person and becomes the Savage. ...read more.

215). As John discovers, "Nothing costs enough here." Social stability has caused man to lose his spirit. In this society, "every change is a menace to stability" (p. 224) and one "can't make tragedies without social instability." In a world like this, there seems to be no hope for change. Even though The Controller admits to Helmholtz that "I like your spirit as much as I officially disapprove of it," (p. 229) it is a private admiration that will never have the courage to let itself be known to the obeying public. By trying to preach to the new society about freedom, John became a martyr in a society where there should be no martyrs. John essentially fulfilled his desire to be sacrificed when he realized that "they might be killed if he didn't help them, and that he might be killed if he did," (p. 214). Essentially, John became a figure similar to Jesus Christ in a society that refused to admit His presence. Sadly, the cost of a life was not enough to change a stubborn society. ...read more.