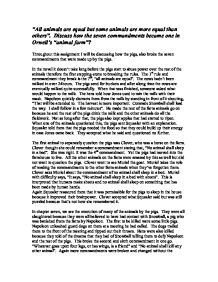 &quot;All animals are equal but some animals are more equal than others&quot;. Discuss how the seven commandments became one in Orwell's &quot;animal farm&quot;?

"All animals are equal but some animals are more equal than others". Discuss how the seven commandments became one in Orwell's "animal farm"? Throughout this assignment I will be discussing how the pigs, also broke the seven commandments that were made up by the pigs. In the novel it doesn't take long before the pigs start to abuse power over the rest of the animals therefore the first stepping-stone to breaking the rules. The 1st rule and commandment they break is the 7th, "all animals are equal". The cows hadn't been milked in over 24hours. The pigs send for buckets and after along time the cows are eventually milked quite successfully. When that was finished, someone asked what would happen to the milk. The hens told how Jones used to mix the milk with their mash. Napoleon quickly distracts them from the milk by standing in front of it shouting, "That will be attended to. ...read more.

Clover accepted what Squealer said but was still puzzled because that's not how she remembered it. In chapter seven, we see the execution of many of the animals by the pigs. They were all slaughtered because they were all believed to have had contact with Snowball, a pig who was banished from the farm by Napoleon. The first to be killed were some little pigs. Napoleon unleashed guard dogs on them at a meeting he had called. The dogs trailed them to the front of the meeting and ripped out their throats. Hens were also killed because they told of the dreams that they had of Snowball telling them to defy Napoleon and the rest of the pigs. This broke the second and sixth commandment in one go. "Whatever goes upon four legs, or has wings, is a friend" and "No animal shall kill any other animal". Again more commandments were broken and changed without the knowledge of the other farm animals. ...read more.

"It was a pig walking on his hind legs. Yes, it was Squealer". The broken commandment in this case was "whatever goes upon two legs is an enemy". Clover nudged Benjamin the donkey who like Muriel was able to read the commandments off for the rest of the farm animals. Clover told Benjamin how her eyesight was failing and that she would like Benjamin to read the commandments for her because they did not look the same. Benjamin read off what was now on the wall, "All animals are equal, but some animals are more equal than others". The next day on the farm shows us the pigs carrying whips in their trotters. They had a radio, were installing a telephone and were reading newspapers. Then they appeared in clothing. This was the last of the commandments the pigs break. Which was, "No animal shall wear clothes". So, without the other animals realising, the pigs made them believe what they wanted them to believe. Also they made them do what they wanted them to do and in general took over Animal Farm with out the other animal's knowledge. ...read more.