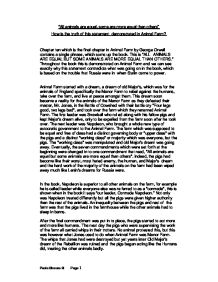 &quot;All animals are equal, some are more equal than others&quot; - How is the truth of this statement demonstrated in Animal Farm?

"All animals are equal, some are more equal than others" How is the truth of this statement demonstrated in Animal Farm? Chapter ten which is the final chapter in Animal Farm by George Orwell contains a single phrase, which sums up the book. This is "ALL ANIMALS ARE EQUAL BUT SOME ANIMALS ARE MORE EQUAL THAN OTHERS." Throughout the book this is demonstrated on Animal Farm and we can see exactly why this statement contradicts what was going on in the book, which is based on the trouble that Russia were in when Stalin came to power. Animal Farm started with a dream, a dream of old Major's, which was for the animals of England specifically the Manor Farm to rebel against the humans, take over the farm, and live at peace amongst them. This dream soon became a reality for the animals of the Manor Farm as they defeated their master, Mr. Jones, in the Battle of Cowshed with their battle cry "Four legs good, two legs bad", and took over the farm which they renamed Animal Farm. The first leader was Snowball who ruled along with his fellow pigs and kept Major's dream alive, only to be expelled from the farm soon after he took over. ...read more.

A pig, Squealer was in charge of propaganda, and he would often change the commandments of the farm so that they would fit the actions of Napoleon or the "upper class" of the farm, which was supposedly classless. For example, at one time a commandment read, "No animal shall drink alcohol" but soon after Napoleon drank an abundance and almost died the commandment was changed to "No animal shall drink to excess." which made it seem as though Napoleon was within the rules. Another instance where Napoleon showed leadership was when everyone on the farm who had showed support at one time for Snowball, the exiled former leader, was executed on the spot. This act was a resemblance of The Great Purge in Russia where all opposition was killed off. The governing system of Animal Farm was corrupt, but it did not stop the propaganda and executions. At first on the Animal Farm, it was promised to the majority of the animals who were neither Napoleon or a pig, or the so-called "working class", that "from each according to his ability to each according to his needs", no more, no less. ...read more.

There are two main lessons that the book illustrates. The first one is that there will never be a government where all people are exactly equal. In the book the animals have a government set up and one of the commandments the animals have reads, "All Animals are Equal" By the end of the of the book after the pigs had taken over the farm the commandment was changed to "All Animals are Equal, but some are more equal then others" So in the course of time all there will always be some that end up being or acting like they are better then the rest, making it seem like some are more equal. Another lesson that can be learned from this book is that if power is abused then all will be lost. In Animal Farm Napoleon had all the power when he got rid of Snowball. The power went to Napoleon's head and he started to make a lot of bad choices. He changed all the commandments so he could do the same things to the animals as the humans used to do. So what happened to the farmer ended up happening to Napoleon and the rest of the pigs. Paula Strauss 9I Page 1 ...read more.