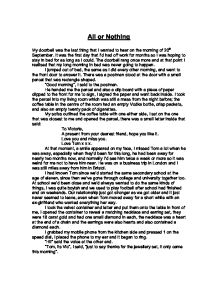 All or Nothing My doorbell was the last thing that I wanted to hear on the morning of 20th September. It was the first day that I'd had off work for months so I was hoping to stay in bed for as long as I could. The doorbell rang once more and at that point I realised that my long morning in bed was never going to happen. I jumped out of bed, the same as I did every other morning, and went to the front door to answer it. There was a postman stood at the door with a small parcel that was rectangle shaped. "Good morning", I said to the postman. He handed me the parcel and also a clip board with a piece of paper clipped to the front for me to sign, I signed the paper and went back inside. I took the parcel into my living room which was still a mess from the night before; the coffee table in the centre of the room had an empty Vodka bottle, crisp packets, and also an empty twenty pack of cigarettes. My sofas outlined the coffee table with one either side, I sat on the one that was closest to me and opened the parcel, there was a small letter inside that said: To Victoria, A present from your dearest friend, hope you like it. Love you and miss you. Love Tom x x x. At that moment, a smile appeared on my face, I missed Tom a lot when he was away, especially when they'd been for this long, he had been away for nearly two months now, and normally I'd see him twice a week or more so it was weird for me not to have him near. He was on a business trip in London and I was still miles away from him in Bristol. I had known Tom since we'd started the same secondary school at the age of eleven, since then we've gone through college and university together too. ...read more.

"Jane, it's Victoria, just to say I'll be at the party, will be there as usual early to help set up, see you then if not before", and I put down the phone. I went into the kitchen to see it gleaming, the living room had also now been cleaned and there was no rubbish on the table anymore, the cleaner had been in. I put the kettle on, picked up my post from the kitchen side, and sat down on a breakfast bar stool to open it. The remainder of the day passed as some what of a blur, I couldn't have done anything particularly exciting because I would have remembered. I only finally looked up at the clock on my living room wall at 10 p.m. and I knew that I had work in the morning so I went to bed. The two days after were the same, work which never changed from day to day, and doing the same thing every day made me more bored than anything else. I did longer hours than I should every day because I knew I had nothing to do when I got home and this made the two days go quicker. The weekend came and I knew that Tom was supposed to be coming home. I had the whole weekend off, I wasn't intending to get drunk but just to be sure I had booked the two days which meant I didn't have to go to work with a hangover. I had all day to make myself look stunning for the night ahead; it was only ten thirty in the morning so I got out of bed and put the television on in the living room. I had to be at Jane's at five o'clock to help her with any last minute things, she was having caterers in to cook all of the food and to set most of it up but she knew that I would be sure of what Tom liked. ...read more.

I screamed with excitement as he slid inside me. When I woke that morning, I felt different, and then I remembered what had happened the night before. I got out of the bed still totally naked, and grabbed my clothes from the floor on the way out the door, Tom was still asleep and I didn't think that I could wake him; I just wanted to get out. When I got home I went straight into my bedroom where I cried for hours, I didn't regret the night before but I didn't want to ruin what we already had either. The phone rang beside the bed and I picked up to hear a voice which I knew was Tom's. I was crying as I answered, and Tom could tell this. He asked me what was wrong and I explained. "I want it all or nothing at all. There's nowhere left to fall when you reach the bottom, it's now or never. Is it all or are we just friends, is this how it ends, with a simple telephone call, you leave me here with nothing at all?" I sobbed. "That's what I phoned to say to you Victoria, I want you to have it all, I want us to be together properly, I'm sick of pretending that I don't love you because I do!" he answered. I told him that I loved him too, I was overpowered by shock. The next few weeks passed quickly, Jane loved the idea of us being back together again, so did all of our friends. We're planning to wed in the summer and then we want to start a family of our own. Who would have guessed that you can look love in the face for so long and not even realise that it's there. This book is a lesson for all of you, you only live once, live it to the full, don't let anything come between you and your dreams... ?? ?? ?? ?? ...read more.