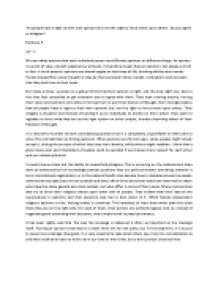 ﻿?All people have a right to their own opinions but not the right to force them upon others.? Do you agree or disagree? Rachana. R 10 ? C We can safety assume that each individual person has different opinions on different things. An opinion is a point of view, a belief, judgment or attitude. It therefore means that an opinion is not always a truth or fact. A lot of people?s opinions are based largely on their way of life, thinking abilities and morals. Human beings filter every thought or idea by their personal history, beliefs, motivations and concepts that they hold true to their heart. But many a times, a person or a group thinks that their opinion is right, and the only right one. ...read more.

It is natural for humans to have contradicting opinions but it is completely unjustifiable on their part to solve this contradiction by forcing opinions. When opinions are forced upon, some people might simply accept it, during the process of which they lose their identity, while others might retaliate. I think that a great many wars and tribulations of people could be avoided if we showed more respect for each other and our individual beliefs. It seems like we have lost the ability to respectfully disagree. This is occurring on the national and state level as evidenced by the increasingly partisan positions that our political leaders are taking, whether it be in international negotiations, or in the national health care debate. ...read more.

While having independent religious opinions is fine, forcing others is unethical. The hardships of wars arise when both the sides think they are on the right side. For each of them, their actions are perfectly logical. And so, instead of negotiating and rethinking their decisions, they simply revolt to physical violence. It has been rightly said that ?the way the message is delivered is often as important as the message itself.? Forcing of opinions may lead to a short term win for one party, but in the long term, it is bound to cause more damage than good. It is very essential to take what others say or do into consideration as only then shall we be able to think not in our view or their view, but a third person universal view. ...read more.

The argument is cogently made, though overstated in one or two instances, and follows logical steps that are hard to refute. The lexical range used is well up to the task and sentence and paragraph structure are excellent, marred by only a few minor errors.