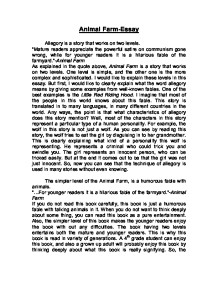 Allegory is a story that works on two levels.

Animal Farm-Essay Allegory is a story that works on two levels. "Mature readers appreciate the powerful satire on communism gone wrong, while for younger readers it is a hilarious fable of the farmyard."-Animal Farm As explained in the quote above, Animal Farm is a story that works on two levels. One level is simple, and the other one is the more complex and sophisticated. I would like to explain these levels in this essay. But first, I would like to clearly explain what the word allegory means by giving some examples from well-known fables. One of the best examples is the Little Red Riding Hood. I imagine that most of the people in this world knows about this fable. This story is translated in to many languages, in many different countries in the world. Any ways, the point is that what characteristics of allegory does this story mention? Well, most of the characters in this story represent a particular type of a human personality. For example, the wolf in this story is not just a wolf. ...read more.

Sugarcandy Mountain is signifying heaven, and Moses represents religion. This means any religion. Like Moses representing religion, in this book, all the characters represent something or somebody in the Russian revolution. But this book means more. Although this book is based on the Russian revolution, this book is not only about the Russian revolution. The clearest example of this is Napoleon and Snowball. Napoleon represents Stalin. Stalin and Napoleon were both tyrant leaders, who received all the profit with out producing things by them selves. On the other side was Snowball who represents Trotsky. Snowball and Trotsky were both brilliant speakers, and they tried to spread revolution. So as you can see the characters in Animal Farm each represents specific human personalities. This technique makes the reader easier to see the traits of the person. This technique also makes the reader easier to understand. Plus, the book becomes more entertaining to read with different animal characters, then only with human characters. By using different animals, it makes the book more attractive than using humans. This is probably why many books, comics, and movies use this technique so much. ...read more.

The book Animal Farm is not only about the Russian revolution. The writer George Orwell is using the Russian revolution for the basis of this story to make it simple. But what happened in this book can happen to any countries in the world. This is not only about communist countries. It signifies how a country can easily corrupt under a tyrant leader. Without even the people knowing, a terrible leader can easily control the country. By reading this book, we can see that we should try to save our own country by our own hands. We should not depend on the government, and we should not 100percent believe what the media says. The citizen of the country needs to keep their eyes wide opened. You never know if the truth is being told. Did the Russian people know what was going on? Did they THINK they knew what was going on? We should never forget what happened to Russia by reading this book, Animal Farm. You never know when it will be for YOU to stand up and go against the tyrant leader. So, please do not forget about Animal Farm and the Russian revolution. Even though you think that this will not happen to you, it might happen... You never know. ...read more.