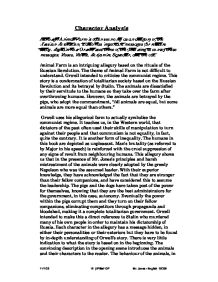 Although Animal Farm is often seen only as an allegory of the Russian Revolution, it also has important messages for readers today - Explain how Orwell uses three of the following to convey these messages: Moses, Mollie, Benjamin, Squealer, and the cat.

Character Analysis Although Animal Farm is often seen only as an allegory of the Russian Revolution, it also has important messages for readers today. Explain how Orwell uses three of the following to convey these messages: Moses, Mollie, Benjamin, Squealer, and the cat. Animal Farm is an intriguing allegory based on the rituals of the Russian Revolution. The theme of Animal Farm is not difficult to understand. Orwell intended to criticise the communist regime. This story is a condemnation of totalitarian society based on the Russian Revolution and its betrayal by Stalin. The animals are dissatisfied by their servitude to the humans so they take over the farm after overthrowing humans. However, the animals are betrayed by the pigs, who adopt the commandment, "All animals are equal, but some animals are more equal than others." Orwell uses his allegorical farm to actually symbolise the communist regime. It teaches us, in the Western world, that dictators of the past often used their skills of manipulation to turn against their people and that communism is not equality, in fact, quite the contrary. It is another form of inequality. The humans in this book are depicted as unpleasant. Man's brutality (as referred to by Major in his speech) is reinforced with the cruel suppression of any signs of revolt from neighbouring humans. This allegory shows us that in the presence of Mr. Jones's principles and harsh mistreatment of the animals were clearly adopted by the greedy Napoleon who was the assumed leader. With their superior knowledge, they have acknowledged the fact that they are stronger than their fellow companions, and have considered this to assume the leadership. The pigs and the dogs have taken post of the power for themselves, knowing that they are the best administrators for the government, in this case, autonomy. Eventually the power within the pigs corrupt them and they turn on their fellow companions, eliminating competitors through propaganda and bloodshed, making it a complete totalitarian government. ...read more.

Then he disappeared and he was the one that sent messages to the Western world. Whatever the case may be, there are some in trying to manipulate people's standard of choice and options, (just like Moses did), they try to keep people hopeful and productive. Jones first uses Moses to keep the animals working, and he was successful in many ways before the rebellion. However, when the pigs take over, Moses escapes. Eventually, he finds his place again, when the pigs are turning out worse than Mr. Jones and then Moses finds his place again and tries to lure everyone with the same lies. However, he is not successful this time. Now, again, Moses does represent Orwell's view of the church. He has a cynical and harsh view of the church so therefore this proves that Animal Farm is not simply an anti- communist work meant to lead people into capitalism and Christianity. The truth may be that Orwell found much hypocrisy in both systems. Therefore, in conclusion, Moses represented the Church, where the belief in Christianity and capitalism is included and the pigs demonstrated an ideology of communism, which is completely the opposite. Obviously, a social system based on common ownership of property, and their own means of production may not be suitable after all, and that trade and industry ruled by a private owner that might be suitable for the world today. Moses helped the Western world, many others, and us; to realise that communism brings many dangers with it too. According to the Russian Revolution, America could prove that capitalism and democracy could outlive a system of government-mandated equality. Simplified, George Orwell's view could have been, that the farm with a private owner could have made the fair share of work between the animals rather than a totalitarian government ruled by the self- assumed leaders the pigs. Benjamin is an elderly donkey and is seen as a cynic. ...read more.

Squealer is a brilliant propagandist (not to the animal's consent) which makes him an articulate orator. But his distortion of the truth and language becomes too whimsical when he claims that 'A too rigid equality in rations... would have been contrary to the principles of Animalism'. This completely distorts the meaning of the word 'equality', reducing language to nonsense. Also equality is revealed to the reader as the weeks go on, when the animals are working as harder as ever and their lives are 'harsh and bare', with the comparison to the pigs, who 'were putting on weight if anything'. This makes him highly hypocritical. Propaganda is widely associated with Squealer. He convinces others of the truth of their arguments. Orwell, again, stated that Squealer could turn 'black into white'. He uses rhetorical questions which do not require an answer from the audience - so the speaker does the thinking for them such as, 'Surely, comrades, you do not want Jones back?' This quote also demonstrates a further technique, targeting the enemy. In doing this, the animals will forget their personal problems and concentrate on the enemy outside their society (Snowball, and Jones). He invents questionable scientific evidence (which may or may not be entirely true) to convince the animals that the pigs should have apples, reads out lists of statistics that have been forged and tells the animals of written evidence, which obviously, haven't been produced to prove that Snowball is in league with Jones. But he knows very well that animals cannot read. Squealer, as a propagandist, uses several weapons. The pigs are able to exploit the other animals, as they are intelligent enough to manipulate the truth in an extraordinary way that their evil actions seem acceptable. This is achieved through, purely, a skilful use of language. Squealer, despite being a marvellous propagandist, hypocrite, and orator, he is also a coward. There are many indications that suggest this. It is apparent that Squealer does not rely on his eloquence alone. ...read more.