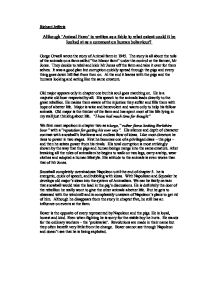 Although 'Animal Farm' is written as a fable to what extent could it be looked at as a comment on human behaviour?

Richard Jefferis Although 'Animal Farm' is written as a fable to what extent could it be looked at as a comment on human behaviour? Gorge Orwell wrote the story of Animal farm in 1945. The story is all about the toils of the animals on a farm called "the Manor farm" under the control or the farmer, Mr Jones. They decide to rebel and kick Mr Jones off the farm and take it over for them selves. It was a good plan but corruption quickly spread through the pigs and every thing goes down hill fast from then on. At the end it leaves with the pigs and the humans looking and acting like the same creature. Old major appears only in chapter one but his soul goes marching on. He is a majestic old boar respected by all. His speech to the animals leads directly to the great rebellion. He makes them aware of the injustice they suffer and fills them with hope of a better life. ...read more.

With Napoliean and Squealer he develops old major's ideas into the system of Animalism. We can be fairly certain that snowball would take the lead in the pig's discussions. He is definitely the doer of the rebellion he really wont to give the other animals a better life. But he gets to obsessed with the windmill and is compleately unaware of Napoleon's plans to get rid of him. Although he disappears from the story in chapter five, he still has an influence on events at the farm. Boxer is the opposite of every represented by Napoleon and the pigs. He is loyal, honest and kind. Even when fighting he is sorry for the stable boy he hurts. He stands for the ordinary workers - the 'proletariat'. Revolutions are made in their name but they often benefit very little from the change. Boxer cannot see through Napoleon and doesn't see that he is being exploited. Benjamin is the oldest animal on the farm. He will probably outlive them all - " none of you have ever seen a dead donkey" he is bad tempered and pessimistic, he never shirks his work but dose no more than he has to. ...read more.

She is vain and selfish, interested only in ribbons and sugar lumps. Any system of government suits her as long as she gets to keep her 'perks'. She becomes dishonest while trying to hang on to her little luxuries. The rebellion is not for her! And she runs away. So in conclusion the answer to the question is yes it is possible to see the story of animal farm as a comment on human behaviour. I believe this because Orwell described all the animals in the story with terms we use to describe the behaviour of other people for example "benevolent","wise", " motherly" and "foolish". It is probably easy to see that that book dose describe the animals to be an easer way to comment on the human ways of life. If we changed all the animals to people and made the story relevant it would be very hard to think about what goes on in the story for example the battle of the windmill where all those animals were killed, and when Napoleon has lots of the animals killed in front of the other animals. ...read more.