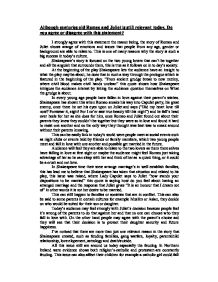 Although centuries old Romeo and Juliet is still relevant today. Do you agree or disagree with this statement? I strongly agree with this statement the reason being, the story of Romeo and Juliet shows arange of emotions and issues that people from any age, gender or background are able to relate to. This is one of many reasons why the story is such a big success in today's culture. Shakespeare's story is focused on the two young lovers that can't be together and all the anguish that surrounds them, this is true as it follows on in to day's society. At the beginning of the play Shakespeare lets the audience have an insight to what the play may be about, he does that in such a way through the prologue which is featured in the beginning of the play. "From ancient grudge break to new mutiny, where civil blood makes civil hands unclean" this quote shows how Shakespeare intrigues the audience interest by letting the audience question themselves on What the grudge is about. In every young age people have fallen in love against their parent's wishes. Shakespeare has shown this when Romeo sneaks his way into Capulet party, his great enemy, once there he set his eyes upon on Juliet and says ("Did my heart love till now? Forswear it, sight! For I ne'er saw true beauty till this night") ...read more.

All this issue still are around us today especially the feuding. In Northern Ireland were evidence shows both religion's-catholic and protestant-are constantly feuding. This issue can also affect their children for example a catholic girl could fall in love with a protestant boy, this can create an even worse situation where lies and betrayal can impose both parties against each other. This dilemma is shown in the story where Romeo and Juliet elope to get married. This has made them lie and betray their parent's which creates even more tension. Friar Lawrence believes that it will bring the two different households together which he trusts will make the feuding stop. "For this alliance may so happy prove to turn your household rancour to pure love", words of Friar Lawrence. Audience will look at this and feel awakened by Friar Lawrence's ambition to marry the two lovers that could bring the households together; this is another issue that that audience may feel unsure about, which could turn out for the worst instead of becoming better. Children who are brought up in upper class families don't always interact emotionally with their own parents as they employ nannies to look after their own children while they are at work for long periods, or it's just traditional for them to have a nanny as them their selves been brought up will one . ...read more.

Death and suicide can be found in people who are afraid, for instance, two couples who have been together for years and one of the partners dies unexpectedly, this can have a strong effect on that person. That person may feel scared, alone and afraid to communicate to anyone, which can lead to suicide over the person they have lost. This is similar for Romeo and Juliet as Juliet awakens to find her Romeo lay dead beside "I will kiss thy lips haply some poison yet doth hang on them, to make me die with a restorative". Her thought turn towards suicide which leads her to be with Romeo in eternal life. The audience will feel that the characters see no other way of being together and may understand Shakespeare views upon that scene. The others views that the audience may feel that they cannot relate to is the death, why would two young lovers turn towards death when there could be other options that would save them? I've come to the conclusion that Shakespeare has taken real life situations and put together in to a tragic love story, this has been done through number of his plays such as Macbeth and Hamlet, these play's have the same similarities situation as seen in Romeo and Juliet's play, which consist of feuding, love, revenge and suicide. This very old play relates human nature interaction with issues which not only interesting for the audience, but they can relate to them in today's culture. ...read more.

This student has remained focused on the question throughout and has used detailed reference to the text to back points up. More emphasis on language would have helped but an intelligent response given.