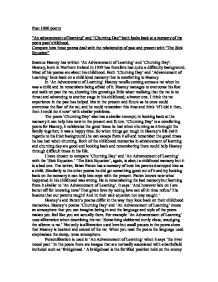 &quot;An advancement of learning&quot; and &quot;Churning Day&quot; both looks back at a memory of the poets past/ childhood. Compare how these poems deal with the relationship of past and present with &quot;The Sick Equation&quot;

Post 1900 poetry "An advancement of learning" and "Churning Day" both looks back at a memory of the poets past/ childhood. Compare how these poems deal with the relationship of past and present with "The Sick Equation" Seamus Heaney has written 'An Advancement of Learning' and 'Churning Day'. Heaney, born in Northern Ireland in 1939 has therefore had quite a difficulty background. Most of his poems are about his childhood. Both 'Churning Day' and 'Advancement of Learning' look back on a childhood memory that is comforting to Heaney. In 'An Advancement of Learning' Heaney recalls coming across a rat when he was a child and he remembers being afraid of it. Heaney manages to overcome his fear and walk on past the rat, showing him growing a little wiser realising that the rat is no threat and advancing to another stage in his childhood; a braver one. I think the rat experience in the past has helped him in the present and future as he once could overcome the fear of the rat, and he could remember this time and think 'if I did it then, then I could do it now' with similar problems. The poem 'Churning Day' also has a similar concept; in looking back at the memory it can help him now in the present and future. ...read more.

When you read the poem the language used emphasises the damp, tense atmosphere. Personification is used in 'An Advancement of Learning' when it says 'the river nosed past.' In the poem there are images that are normally associated with a battlefield included such as 'Bridgehead.' A bridgehead is the fortified position held on the enemy side of the river. I think images such as these have been used as Heaney thinks of the rat as the enemy as he is afraid of it and to him it is dangerous. Heaney is almost at war with the rat. The poem 'An Advancement of Learning' uses words in an unusual way. He turns certain nouns and adjectives into verbs, creating his own words. For example he turns the noun 'slime' into the verb 'slimed' and turns the adjective 'nimble' into the verb 'nimbling.' I think he does this to give more precise descriptions and convey his actual feelings of things more realistically to the reader. It also makes the poem a bit more interesting using unusual descriptions. The poem 'Churning Day' also makes us as the readers get a real taste of the childhood experience. It uses personification and makes things sound like they are alive. ...read more.

It is conveying how he wanted to break free from the cocoon his parents trapped him in. An albatross is used to represent divorce, as it is associated as being a curse. 'The Sick Equation' uses very straightforward language to convey direct feelings. I think that he does this so that the poem could be accessible to a large audience, I don't think that the poem was supposed to have any hidden meanings, it was straight to the point. 'In school I learned that one and one made two [...] In the raw cocoon of parental hate is where I learned that one and one stayed one.' Patten is writing the poem for a purpose; to show that he had learnt from his parents' mistakes and he had overcome the problems that he had faced and now he can talk about it. Patten is directly stating how the childhood experience has affected him and how it has possibly helped him. This differs from Heaney's poems as they indirectly show emotion unlike Patten does. You have to assume the hidden meaning of the poems and the recall of the memory. In 'Churning Day's' case it is an escape route to remember a good time to possibly block out the bad memory of today. In 'An Advancement of Learning' it is to look back on a memory that could help him in the future to tackle problems. ...read more.