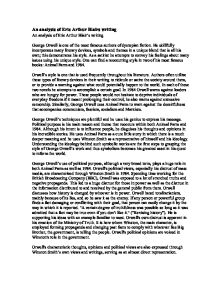 An analysis of Eric Arthur Blairs writing An analysis of Eric Arthur Blair's writing George Orwell is one of the most famous authors of dystopian fiction. He skillfully incorporates many literary devices, symbols and themes in a unique blend that is all his own; this demonstrates his style. As a satirist he attempts to convey his feelings about many issues using his unique style. One can find a reoccurring style in two of his most famous books: Animal Farm and 1984. Orwell's style is one that is used frequently throughout his literature. Authors often utilize these types of literary devices in their writing to ridicule or satire the society around them, or to provide a warning against what could potentially happen to the world. In each of these two novels he attempts to accomplish a certain goal. In 1984 Orwell warns against leaders who are hungry for power. These people would not hesitate to deprive individuals of everyday freedom if it meant prolonging their control, he also warns against excessive censorship. Similarly, George Orwell uses Animal Farm to warn against the deceitfulness that accompanies communism, fascism, socialism and Marxism. George Orwell's techniques are plentiful and he uses his genius to express his message. Political purpose is his main reason and theme that reoccurs within both Animal Farm and 1984. Although his intent is to influence people, he disguises his thoughts and opinions in his incredible stories. He uses Animal Farm as a cute little story in which there is a much deeper meaning and he uses Winston Smith as a representative of himself and his ideology. Understanding the ideology behind such symbolic works are the first steps to grasping the style of George Orwell's work and thus symbolism becomes his greatest asset in his quest to inform the world. George Orwell's use of political purpose, although a very broad term, plays a huge role in both Animal Farm as well as 1984. ...read more.

If one were to read these novels and not perceive the opinions and information that George Orwell wishes to portray, it would simply be a waste of effort on his part. He uses several different literary devices that, in compilation, provide a framework for his writing style. Symbolism is a major device used in both 1984 as well as Animal Farm. Throughout London, Winston sees posters showing a man gazing down over the words "BIG BROTHER IS WATCHING YOU" (1984 2) everywhere he goes. Big Brother is the representative of the Party. The citizens are told that he is the leader of the nation and the head of the Party. Winston can never determine whether or not he actually exists. The face of Big Brother symbolizes the Party in its public expression and is a reassurance to most people, but he is also an open threat (one cannot escape his gaze). Big Brother also symbolizes the ambiguity with which the higher ranks of the Party present; it is impossible to know who really rules Oceania, what life is like for the rulers, or why they act as they do. Winston thinks he remembers that Big Brother emerged around 1960, but the Party's official records date Big Brother's existence back to 1930, before Winston was even born. By deliberately weakening people's memories and flooding their minds with propaganda, the Party is able to replace individuals' memories with its own version of the truth. It becomes nearly impossible for people to question the Party's power in the present when they accept what the Party tells them about the past-that the Party arose to protect them from bloated, oppressive capitalists, and that the world was far uglier and harsher before the Party came to power. Winston vaguely understands this principle. He struggles to recover his own memories and formulate a larger picture of what has happened to the world. ...read more.

In that Old Major at the beginning assumes that man is the only enemy of the animals. He emphasizes that animals must never imitate man, especially his vices. Gradually in their life-style and their indifference to the animals, the pigs exploit the animals much more than Jones ever did. This irony particularly depicts how low the pigs had actually become, and how Stalin had made things much worse than it had originally been under the Czar's rule. This further enhances the satirical aim of condemning the target. Through satirical techniques such as irony, fable, and metaphor, George Orwell paints a brilliant picture of the evils in Communist Russia in his book Animal Farm. He is very effective in doing so and condemns his targets through every thread of his book including the characters, the themes, and even the style. He does so simply, yet expressively, and is very successful in achieving the satirical aim of condemning his targets. George Orwell's themes and styles are evident by his use of political purpose, concise syntax, symbolism and general appeal. He skillfully incorporates many literary devices, symbols and themes in a unique blend that is all his own, or his style. Understanding Orwell's ideology behind such symbolic works are the first steps to grasping the style of George Orwell's work and thus symbolism becomes his greatest asset in his quest to inform the world. Each of the above characteristics can be seen profoundly in the famous dystopian novels Animal Farm and 1984. George Orwell presents a warning for all who read his works by presenting his opinion. He strongly believes that the direction the world is heading is by no means beneficial to anyone, save the individuals in power. Every piece of literature has a purpose and George Orwell's purpose is strictly political. The overruling statement his attempt to arouse the people who sit around accepting the injustice played upon them. His goal is to prevent the world from making a horrible mistake by sacrificing our God-given human rights in return for authority, control and power. ...read more.