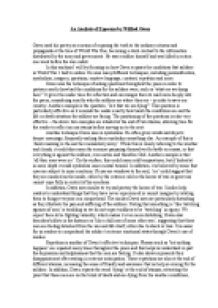 An Analysis of &quot;Exposure&quot; by Wilfred Owen

﻿An Analysis of Exposure by Wilfred Owen Owen used his poetry as a means of exposing the truth to the ordinary citizens and propaganda at the time of World War One, becoming a stark contrast to the information distributed by the army and government. He was a soldier himself and was killed in action one week before the war ended. In this analysis I will by focusing on how Owen exposes the conditions that soldiers in World War 1 had to endure. He uses many different techniques, including personification, symbolism, imagery, questions, emotive language, contrast, repetition and more. Owen uses the technique of asking questions throughout the poem in order to portray exactly how bad the conditions for the soldiers were, such as ?what are we doing here?? It gives the reader time for reflection and encourages them to read more deeply into the poem, considering exactly why the soldiers are where they are ? in order to save our country. Another example is the question; ?Is it that we are dying?? This question is particularly effective as it reminds the reader exactly how harsh the conditions are and the life-or-death situation the soldiers are facing. The positioning of the questions is also very effective ? the above two examples are situated at the end of two stanzas, allowing time for the reader to reflect on one stanza before moving on to the next. ...read more.

We imagine soldiers to be masculine and engaged in battle, not cringing in ?holes? to try and avoid an inevitable death. Owen also states that ?slowly [their] ghosts drag home?, which is a very effective example of imagery due to the fact that it implies that men are dying. It also implies that they are leaving family and relatives behind and that they were ordinary people with homes and lives, not insignificant cannon fodder. The soldiers are ?lie out [there]? in the snow and ice, freezing slowly to death. Is seems that they have to proper equipment to keep them warm and are too exhausted to carry on. It is as if they have accepted that they are going to die out in the cold, so far from home and in preventable conditions. In addition, Owen states that ?His frost will fasten on this mud and us?, implying that God has sent the frost to settle upon them, pushing them closer and closer to an inevitable death. People of this time would have been very religious and believed in the love of God, therefore to comprehend that perhaps God is not looking out for them must be an acceptance that nobody is looking out for them anymore and they are certainly going to die. ...read more.

In addition, the bullets are described as being ?less deadly than air?. The use of the word deadly is effective as it reminds us how dire the situation is, but the phrase itself shows that something as harmless as air could turn so deadly, killing more people than weapons that were designed to kill. To add to this, the soldiers ?cringe in holes?. This means that they are recoiling from danger, the danger presently being the natural world ? snow, wind and cold. This brings to the public eyes that the danger of war is not just the enemy ? but everyday things that can turn sinister in the wrong situation. The most troubling example of emotive language is ?on us the doors were closed?, referring to a house in which ?innocent mice rejoice?. Sadly, this shows that even the mice have better living conditions than they do and that the soldiers could have been given shelter ? instead, the doors and shutters and closed on them. This shows exactly how much help the soldiers have been given. The truth is that they haven?t been given any support at all and have just been sent out and abandoned without a further thought. Owen very cleverly implies that the army does not care about its men and neither does the government. Yet another technique Owen uses is contrast. ...read more.