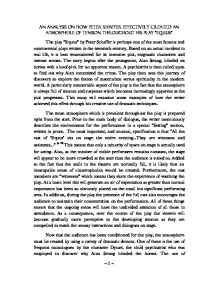 An analysis on how peter shaffer effectively created an atmosphere of tension throughout his play &quot;Equus&quot;

An analysis on how peter shaffer effectively created an atmosphere of tension throughout his play "Equus" The play "Equus" by Peter Schaffer is perhaps one of the most famous and controversial plays written in the twentieth century. Based on an actual incident in real life, it is best remembered for its inventive plot, enigmatic characters and intense scenes. The story begins after the protagonist, Alan Strang, blinded six horses with a hoof-pick for no apparent reason. A psychiatrist is then called upon to find out why Alan committed the crime. The play then uses this journey of discovery to explore the theme of materialism versus spirituality in the modern world. A particularly memorable aspect of the play is the fact that the atmosphere is always full of tension and suspense which becomes increasingly apparent as the plot progresses. This essay will examine some examples of how the writer achieved this effect through his creative use of dramatic techniques. The tense atmosphere which is prevalent throughout the play is prepared right from the start. Prior to the main body of dialogue, the writer meticulously describes the environment for the performance in a special "Setting" section, written in prose. ...read more.

Now that the audience has been conditioned for the play, the atmosphere must be created by using a variety of dramatic devices. One of these is the use of frequent monologues by the character Dysart, the child psychiatrist who was employed to discover why Alan Strang blinded the horses. The use of monologues, where the character delivers a solo speech to those watching the play, is a device that was used extensively by Schaffer and many well-know playwrights before him. Here in "Equus", the monologues are used to reveal to the audience Dysart's own thoughts and doubts but also more importantly the conflicts occurring between the characters. For example, on the subject of the alienation between him and his wife he asks rhetorically: "Do you know what it's like for two people to live in the same house as if they were in different parts of the world?" (p. 61) Although by itself this sentence is a very effective simile, it is the way which it is delivered that creates a chilling impact. Very similar to how skilled orators influence their listeners' feelings at whim, Dysart addresses the audience directly and in isolation and this ensures that his words will have the maximum emotional effect. ...read more.

Upon hearing this noise, those who are watching the play immediately knows that a revelation in the plot is about to occur. Nevertheless, Schaffer maintains the suspense by keeping the climax painfully delayed. An excellent example would be the end of Act I where some of the plot's most important developments are revealed. In this case, the "Equus noise" is prolonged for a length of three scenes. Starting with "Humming from the chorus" (p.68), the noise expands in an almighty crescendo before being suddenly muted in the Act's climactic finish. During this time, audience would be wildly intrigued as to what is going to happen and the tense atmosphere is greatly enhanced by the animalistic quality of the "Equus noise". In "Equus", Peter Schaffer has combined the right ingredients to create a remarkable and popular piece of literature. Although his plotlines may be controversial, there is no denying that he is a master of manipulating the mood and the atmosphere of his plays. Since "Equus" is primarily a story of mystery, it is only expected that some tension or suspense be included. However, Schaffer is able to sustain them for the length of the play and this is a major factor in why "Equus" has achieved success. ?? ?? ?? ?? ~ 1 ~ ...read more.