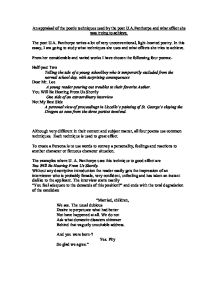 An appraisal of the poetic techniques used by the poet U.A.Fanthorpe and what effect she was trying to achieve.

An appraisal of the poetic techniques used by the poet U.A.Fanthorpe and what effect she was trying to achieve. The poet U.A. Fanthorpe writes a lot of very unconventional, light-hearted poetry. In this essay, I am going to study what techniques she uses and what effects she tries to achieve. From her considerable and varied works I have chosen the following four poems:- Half-past Two Telling the tale of a young schoolboy who is temporarily excluded from the normal school day, with surprising consequences Dear Mr. Lee A young reader pouring out troubles to their favorite Author. You Will Be Hearing From Us Shortly One side of an extraordinary interview Not My Best Side A personal view of proceedings in Uccello's painting of St. George's slaying the Dragon as seen from the three parties involved. Although very different in their content and subject matter, all four poems use common techniques. Each technique is used to great effect. To create a Persona is to use words to convey a personality, feelings and reactions to another character or fictuous character situation. The examples where U. ...read more.

By running words together such as 'Gettinguptime', and 'timetogohomenowtime' plus clearly giving the impression of a small child who feels isolated and out of his depth. We can all remember understanding words like this, and probably still use the technique when talking to kids or animals now. We also can all identify with the feelings of lack of understanding, and being in awe of a grown-up that is made clear in this poem. It is very unconventional to use brackets in poetry. Hardly any other Authors do but Fanthorpe make great effects from this technique. She can easily bring in less important issues without loosing thread of the story. For example in Half-past Two the child had done something very wrong, but '(I forget what it was)' is bracketed to quickly convey its lack of importance. The brackets are also used to bring in a sense of humour, you can imagine the writer smiling as they dismiss this insignificant fact. In Dear Mr. Lee the childlike ability of the writer is emphasized by the ungrammatical use of brackets giving a reader a clear picture of someone trying to put over a difficult set of feelings, and not having the writing skills to do it properly. ...read more.

Smart. To conclude: U. A. Fanthorpe was a teacher of English at Cheltenham Ladies College. She uses her skill with the language in a modern and unconventional way to a fresh attitude to poetry. Many people today dismiss poetry as boring and tedious, but her new look at the subject will encourage young people to read verse as well as prose. Her subjects are mostly light hearted, rather than other modern poets in the anthology being studied who seek to shock or disturb the reader. Although Half-past Two leaves the reader feeling uncomfortable and sorry for the little boy you are not so disturbed as to be put off from reading further of this author's works. I prefer Dear Mr. Lee of the four poems studied. It is easy to identify with the child, and the way Fanthorpe has written it is rebellious against the education system. The letter uses the same language as we would in a rough work essay, for example Cider rather than the whole novel's title. The way that U. A. Fanthorpe creates personas is excellent, e specially Not My Best Side shows her skill in that she sets out to give voices to the three subjects in Uccello's masterpiece, and within a few lines has created living characters from a two dimensional image. ...read more.