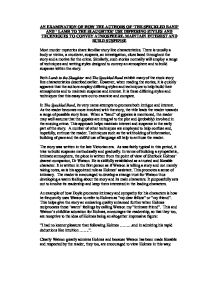 An Examination of How the Authors of &amp;#145;the Speckled Band&amp;#146; and &amp;#145; Lamb To the Slaughter&amp;#146; Use Differing Styles and Techniques To Convey Atmosphere, Maintain Interest and Build Suspense.

AN EXAMINATION OF HOW THE AUTHORS OF 'THE SPECKLED BAND' AND ' LAMB TO THE SLAUGHTER' USE DIFFERING STYLES AND TECHNIQUES TO CONVEY ATMOSPHERE, MAINTAIN INTEREST AND BUILD SUSPENSE Most murder mysteries share familiar story line characteristics. There is usually a body or victim, a murderer, suspects, an investigation, clues laced throughout the story and a motive for the crime. Similarly, such stories normally will employ a range of techniques and writing styles designed to convey an atmosphere and to build suspense within the story. Both Lamb to the Slaughter and The Speckled Band exhibit many of the stock story line characteristics described earlier. However, when reading the stories, it is quickly apparent that the authors employ differing styles and techniques to help build their atmospheres and to maintain suspense and interest. It is these differing styles and techniques that this essay sets out to examine and compare. In The Speckled Band, its very name attempts to promote both intrigue and interest. As the reader becomes more involved with the story, the title leads the reader towards a range of possible story lines. When a "band" of gypsies is mentioned, the reader may well assume that the gypsies are integral to the plot and (probably) involved in the ensuing crime. ...read more.

More attention is placed on building the characters' emotional involvement in the plot and using this character development to build the atmosphere. Dahl's setting is generally homely and cosy. His story is written in the third person and in a chronological order that charts Mary's reactions and actions. Any atmosphere that is built is that that is created by what is revealed inside Mary Maloney's head. The house is not used atmospherically. Dahl's writing style is generally bland with little elaborate language. He uses a plain and clear structure. This style allows the reader to concentrate on the story and the emotions of Mary, and its blandness helps give a sense that extraordinary things can happen to ordinary people. For example, the line after the deed had been committed. "Alright she told herself, so I've killed him." She then immediately begins practicing what she is going to say to the shopkeeper, and how to act normally. Dahl's atmosphere is not created by the traditional "whodunit" story line but by a different method. The question promoted is not who did the crime (as this is revealed early), but whether or not the perpetrator will get away with it. ...read more.

Additionally, after another tirade by Roylott demanding information, he simply answers "It's a little cold for the time of the year", slowing down the pace and relieving tension. 'The Speckled Band' and Lamb to the Slaughter broadly reflect the 19th and 20th century periods from which they come. They may be viewed as being fairly typical of the writing style of their periods. In 'The Speckled Band' the crime is solved (as with all Holmes' murder mysteries). This perhaps reflects the late 19th century belief in the power of science to answer difficult questions and solve mysteries. 19th century morality values and ideas of justice would not have been receptive to the idea of criminals/wrongdoers, 'getting away with it' and this may have influenced Doyle. Conversely, in Lamb to the Slaughter, the crime is left unresolved and a certain contempt is perhaps being shown for authority (the police) and its ability to solve problems - perhaps an example of 20th century cynicism and a mistrust of the 'system' (or at least Dahl's). Altogether, both stories are good examples of how suspense and atmosphere may be created using different methods and techniques. Both approaches employed have merit, and modern day writers continue to utilise aspects of each style. ...read more.