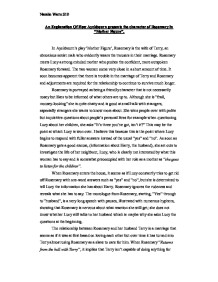 An Explanation Of How Ayckbourn presents the character of Rosemary in &quot;Mother Figure&quot;.

An Explanation Of How Ayckbourn presents the character of Rosemary in "Mother Figure". In Ayckbourn's play 'Mother Figure', Rosemary is the wife of Terry, an obnoxious sexist male who evidently wears the trousers in their marriage. Rosemary meets Lucy a strong-minded mother who pushes the confident, more outspoken Rosemary forward. The two women come very close in a short amount of time. It soon becomes apparent that there is trouble in the marriage of Terry and Rosemary and adjustments are required for the relationship to continue to survive much longer. Rosemary is portrayed as being a friendly character that is not necessarily nosey but likes to be informed of what others are up to. Although she is "frail, mousey-looking" she is quite chatty and is good at small talk with strangers, especially strangers she wants to know more about. She wins people over with polite but inquisitive questions about people's personal lives for example when questioning Lucy about her children, she asks "It's three you've got, isn't it?" This may be the point at which Lucy is won over. I believe this because this is the point where Lucy begins to respond with fuller answers instead of the usual "yes" and "no". ...read more.

Rosemary imitates Lucy by speaking her mind and standing by what she believes in and forming her own opinions; "You're always relaxing". Rosemary also starts to confide in Lucy and tells her that Terry "starts on at me". Rosemary may not know her well but it appears that she trusts Lucy and feels at ease with her because she lets her true feelings become exposed. Lucy obviously notices what a 'bully' Terry is and without explicitly saying, demonstrates to Rosemary how to stand up to him, as a mother would tell her child. After an argument between the characters, Terry comes back to retrieve the key. The key symbolises the power of the relationship. Subconsciously Rosemary has, at least some, power in the relationship because she has hold of the key at that moment in time. The audience can tell that there is a dilemma in this relationship because Rosemary chooses to hand over the key to a more or less stranger over her husband whom she has 'obeyed' for, it seems, many years; ("Rosemary gives Lucy the key"). The control Lucy has over Rosemary could illustrate the 'mother figure' she is becoming. ...read more.

Honestly". The absence of an exclamation mark implies that Lucy does not really mind looking out for two more extra children at all. Although it doesn't seem like Terry minds being treated like a child, I think deep down he hates it and maybe is only doing as he is told because he wants to get out of the house and do what he wants again. On the other hand, I think Rosemary enjoys being told what to do and being treated like a child because it gives her a break from her role of a mother to Terry. She is accustomed to be in Lucy's position but is now in the situation of which Terry is usually in and is enjoying it, shown when she willing kisses Lucy and holds her husbands hand; which possibly doesn't happen much because of frequent fall-outs. In conclusion, I think Ayckbourn uses the character of Rosemary in the play to prove to the audience that even the most shy people can emerge from the shadows at any time and begin to form their own opinions, even if the limelight has been taken from them or have been pushed around by scary and/or big bullies. In order to make this step, one needs a third party to initiate and instil a confidence. Natalie Watts S10 ...read more.