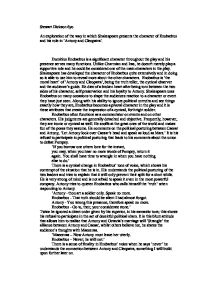 An exploration of the way in which Shakespeare presents the character of Enobarbus and his role in 'Antony and Cleopatra'. Domitius Enobarbus is a significant character throughout the play

Stewart Dickson 6yo An exploration of the way in which Shakespeare presents the character of Enobarbus and his role in 'Antony and Cleopatra'. Domitius Enobarbus is a significant character throughout the play and his presence serves many functions. Unlike Charmian and Iras, he doesn't merely play a supportive role and he could be considered one of the main characters in the play. Shakespeare has developed the character of Enobarbus quite extensively and in doing so is able to use him to reveal more about the other characters. Enobarbus is 'the moral heart' of 'Antony and Cleopatra', being the truth teller, the cynical observer and the audience's guide. He dies of a broken heart after being torn between the two sides of his character, self preservation and his loyalty to Antony. Shakespeare uses Enobarbus on many occasions to shape the audiences reaction to a character or event they have just seen. Along with his ability to ignore political untruths and see things exactly how they are, Enobarbus becomes a pivotal character in the play and it is these attributes that create the impression of a cynical, forthright soldier. Enobarbus often functions as a commentator on events and on other characters. His judgments are generally detached and objective. Frequently, however, they are ironic or cynical as well. He scoffs at the great ones of the world and makes fun of the poses they assume. He comments on the political posturing between Caesar and Antony, 'Let Antony look over Caesar's head and speak as loud as Mars.' ...read more.

This imagery shows her magical powers over everything, even over a man who had huge respect and status from his strength as a soldier. Using the image of 'Smiling Cupids', characters associated with love are introduced, creating a new dimension to her beauty, which runs deeper than just a lustful want. The famous portrait of Venus, which showed a vision more powerful and beautiful than anything imaginable, in Enobarbus' opinion cannot compare to Cleopatra, her beauty 'Beggared all description'. His speech shows the Egyptian side of his character, which can fully understand and comprehend Cleopatra's beauty, whereas Maecenas even after everything that Enobarbus had to say cannot seem to fathom the presence of Cleopatra. Although he (Maecenas) can see her physical attraction and beauty he struggles to look deeper into her soul, showing his Roman lack of imagination and emotion. However Enobarbus is able to fully describe Cleopatra, discarding his Roman persona, with some of the most powerful imaginative and emotive language Shakespeare ever wrote. He changes the audience's perceptions of Cleopatra away from Antony's description of her being 'cunning past men's thought,' and He claims 'age cannot wither her, nor custom stale her infinite variety,' although accepting her volatility and anger, portrays them as more positive aspect of her character than they were depicted earlier in the play. He understands that it is these aspects of her persona that create the charisma and outstanding presence that she has. When comparing Enobarbus' treatment of Octavia his language is flat, unattractive and unimaginative, 'she is of cold, holy and still conversation.' ...read more.

The following soliloquy contains yet more imagery of breaking and dissolution 'This blows my heart.', where Enobarbus reveals his true thoughts. However it is the Elizabethan belief that to 'be full of thoughts' was to be full of despair , grief and distress that concerns Enobarbus he feels that anymore thought will kill him he also says that he is un-loyal betrayer with a crown of gold, 'better my service when my turpitude Thou dost so crown with gold!', which is the opposite view to what we see him as. His talks of 'finishing all foul thoughts', it is this dark imagery of breaking and shattering that creates the enigmatic end to his life, blessing the moon (which in Elizabethan times was thought to causes depression, illness, and even madness) and then crying out to Antony as he dies. His final act is to ask Antony for forgiveness for deserting him, 'Forgive me in thine own particular, But let the world rank me in register A master-leaver and a fugitive. O Antony! O Antony!' His almost hyperbolic reaction shows his final acknowledgement of his own truth that the Roman qualities about him were weaker than the Egyptian characteristics. Enobarbus' tragedy is 'the tragedy of a cynical mind coupled with a soft heart.'His cynical and objective views (the commentator and truth teller.) often are undermined by his poetic, and kind side (Antony's confindantn and his speech in Act 2 scene 2). His realisation of himself a the end definitely does earn himself a 'place I'th' story.' ...read more.