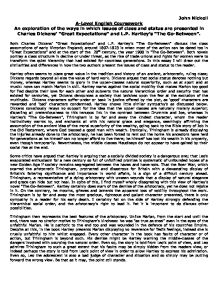 An exploration of the ways in which issues of class and status are presented in Charles Dickens' &quot;Great Expectations&quot; and L.P. Hartley's &quot;The Go-Between&quot;.

John Nickell A-Level English Coursework An exploration of the ways in which issues of class and status are presented in Charles Dickens' "Great Expectations" and L.P. Hartley's "The Go-Between". Both Charles Dickens' "Great Expectations" and L.P. Hartley's "The Go-Between" discuss the class assumptions of early Victorian England; around 1807-1823 is when most of the action can be dated too in "Great Expectations" and at the start of the 20th century, the year 1900 in "The Go-Between". Both novels portray a class structure in decline or under threat, as the rise of trade unions and rights for women were to transform the quiet hierarchy that had existed for countless generations. In this essay I will draw out the similarities and differences in how the two authors present the issues of class and status to the reader. Hartley often seems to place great value in the tradition and history of an ancient, aristocratic, ruling class; Dickens regards beyond all else the value of hard work. Dickens argues that social status denotes nothing but money, whereas Hartley seems to glory in the upper-classes natural superiority, such as at sport and at music: none can match Marion in skill. Hartley warns against the social mobility that makes Marion too good for Ted despite their love for each other and subverts the natural hierarchical order and security that has existed for centuries, yet Dickens denounces a society that lavishes upon the few at the exclusion of the multitude. Dickens characters suffer under or bask in justice offered by the plot, as 'good' characters are rewarded and 'bad' characters condemned. Hartley shows little similar sympathy's as discussed below. Dickens consciously relays no support for the idea that the upper classes are naturally morally superior; dispelling all pretentiousness to this tenuous link in the contrast between Drummle and Joe, whereas in Hartley's "The Go-Between", Triningham is by far and away the kindest character, whom the reader instinctively warms to, and enchants all with his natural grace and elegance, seemingly affirming ...read more.

Perhaps an apology for its rider's indecency, and a defence that it's not its fault! A further perspective is that the green bike is a reflection of Leo; misshapen by being misused by Ted and Marian, later defending himself for years against the memory of what happened to Ted and the emotion that caused it, a guilt which he is apologetic for, and has had no consolation, so he since then has put up barriers and defences against the emotions and feelings that led to Ted's demise. For Dickens, social status and class, as shaped only by money and material possessions, are worthy of no reverence beyond what an individual of that class deserves by features of character and facts of action. Joe, through his simplicity and insistence on looking for the good in others, may well be the character that a reader may well most warm too, more so than the wealthy, exploitative, unfeeling Miss Havisham. When Joe mercifully tells Magwitch, who has just stolen "wittles" from the forge: "God knows you're welcome to it...We don't know what you've done, but we wouldn't have you starved to death for it" And as Dickens describes how no one was interested in seeing him when he returned to the hulks, as Magwitch has done this good act in exonerating Pip from all suspicion, albeit through a lie, we do have sympathy for this "lonely" man. Joe expresses the most humane feelings a reader might feel. Dickens seems to be seeking to defend Joe for not interfering with Pips beatings from the tickler, as he talks of his cruel childhood at the hands of a drunken father and says how he wishes he could take Pip's beatings instead of him. Joe certainly isn't poor as Mrs. Joe's ravings might seem to suggest; he is able later in the novel to pay off the debts Pip has amassed, and as a blacksmith owns the forge and house, Orlick is worse off than he, a skilled trader. ...read more.

Pip aspires to become a Gentleman; to have the money and status that he sees as making him worthy of Estella, who belongs to another world of which he is not apart. Leo, while bereft of Pip's naked ambition, glories and delights in meditating on the grandeur and elegance of Brandham Hall, and the impending marriage of Lord Triningham and Marian; in the process, thriving, enjoying and searching for the praise of others. Leo "loved" Marian, not because he really enjoys her company, as perhaps Ted and Triningham seem to, but because he admires respects and esteems her for her gentile elegance, command of situations, and beautiful femininity. He can neither relax in, nor truly enjoy her company, in a similar way to Mrs. Maudsley. Pip also aspires to Estella, not for Biddy's characteristics of genuine kindness, care and consideration of others, but because of her un-winnable air, superior disposition and demeaning behaviour. From both these examples, it seems that the unattainable is what interests these boys in either affairs as in "The Go-Between" or love as in "Great Expectations". Pessimistically, both value more morally questionable characters, rather than those such as Deny's, Biddy or Joe who seem morally purer characters. Both are bad judges of character, and value social position above morality, until the end, where Pip realises Biddy's true value, and through his illness, reliance on Joe, and return to poverty, becomes rid of the greater part of his snobbishness. Leo at the end is transformed from his innocence of social inequality into distance from all society because of the dangerous subversion of it. In this sense, Dickens novel ends on an optimistic note by its ambiguous ending with the mist's rising; Hartley's novel ends without real reconciliation, Marion is in denial, and Leo is once more the messenger. The fundamental difference between the two novels is that in "Great Expectations", individuals search for self-improvement is the product of an unequal society, while in "The Go-Between" the Maudsleys search for self-improvement is punished because it undermines and destabilises the natural order on which good society is built. ...read more.