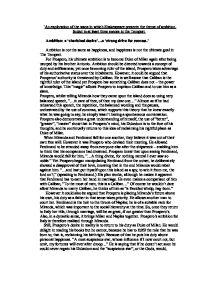 'An exploration of the ways in which Shakespeare presents the theme of ambition, linked to at least three scenes in the Tempest.

'An exploration of the ways in which Shakespeare presents the theme of ambition, linked to at least three scenes in the Tempest. Ambition: a 'cherished desire'...a 'strong drive for success.' Ambition is not the same as happiness, and happiness is not the ultimate goal in The Tempest. For Prospero, his ultimate ambition is to become Duke of Milan again after being usurped by his brother Antonio. Ambition should be directed towards a concept of duty and selflessness, yet once becoming ruler of the island, Prospero takes advantage of his authoritative status over the inhabitants. However, it could be argued that Prosperos' authority is threatened by Caliban. He is well aware that Caliban is the rightful ruler of the island yet Prospero has something Caliban does not - the power of knowledge. This "magic" allows Prospero to imprison Caliban and to use him as a slave. Prospero, whilst telling Miranda how they came upon the island does so using very balanced speech, "...in care of thee, of thee my dear one..." Almost as if he had rehearsed this speech, the repetition, the balanced wording and the pauses, orchestrated by the use of commas, which supports this theory that he knew exactly what he was going to say, he simply wasn't having a spontaneous conversation. ...read more.

It is obvious to the reader that Caliban is the only character who sees the island for its natural beauty; he speaks in appreciative poetry and uses repetitive imagery of the surrounding habitat showing that he understands its true splendour, "the isle is full of noises, sounds and sweet airs that give delight and hurt not...and then, in dreaming, the clouds methought would open, and show riches ready to drop upon me, that when I waked I cried to dream again." Caliban's ambitions are simple ones, no hidden agendas or deceiving thoughts, and contrast greatly to the likes of Trinculo and Stephano for instance. Trinculo and Stephano immediately think of profiting out of Caliban when they first meet him, "...he smells like a fish...were I in England, not a holiday fool there would give a piece of silver." "If I can recover him and keep him tame, he's a present for any Emperor." This shows that they do not think of Caliban as a human being, simply a means to make a profit. They wish to exhibit this strange new creature or sell him off - both are corrupt thoughts. ...read more.

However, Shakespeare shows how ambition itself cannot keep a man alive by Prospero producing a feast and then taking it away, "' enter several strange shapes, bringing in a banquet... "since they have left their viands behind, for we have stomachs"...and with a quaint device the banquet vanishes.'" Ambition cannot feed a man, which is one of the reasons Caliban is nobler than some of the other characters on the island. He is incapable of deceit in the sense that he says what he feels and wants, whereas Antonio is far more devious. Antonio seems to be ambitious for the sake of ambition. As Gonzalo says: 'you would lift the moon out of her sphere if she would continue in it for five weeks without changing," emphasising the fact that he would do something to destroy it, simply for the sake of doing so. In conclusion, the audience leave the play with the idea that order had been restored in the way that is just. It also shows that people like Antonio for instance; need to be controlled with laws - laws made by a character like Prospero. It also hints on the idea that fate and the Gods will succeed in making sure that laws are followed through, for example reclaiming birth rights which is essential to bring the world under order. ...read more.