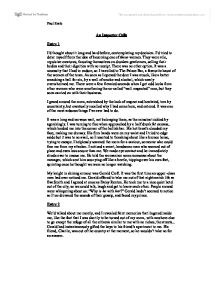 An Inspector Calls Entry 1 I'd thought about it long and hard before, contemplating my decision. I'd tried to deter myself from the idea of becoming one of those women. They were vile, repulsive creatures, thrusting themselves on drunken gentlemen, selling their bodies and their dignities with no receipt. There was no other option. It was a necessity that I had to endure, so I travelled to The Palace Bar, a favourite haunt of the women of the town. As soon as I opened the door I was struck, like a batter smacking a ball for six, by a wall of smoke and alcohol, which nearly overwhelmed me. There were a few frenzied seconds when I got odd looks from other women who were smothering the so-called "well respected" men, but they soon carried on with their business. I gazed around the room, astonished by the lack of respect and hesitated, torn by uncertainty, but eventually recalled why I had come here, and entered. ...read more.

My knight in shining armour was Gerald Croft. It was the first time an upper-class man had ever noticed me. Gerald offered to take me out of that nightmarish life as Eva Smith and I agreed at once as Daisy Renton. He took me to a nice quiet hotel out of the city, so we could talk, laugh and get to know each other. People around were whispering about us: "Why is he with her?" Gerald hadn't seemed to notice so I too drowned the sounds of their gossip, and faced my prince. Entry 2 We'd talked about me mostly, and I revealed faint memories that lingered inside me, like the fact that I was shortly to be turned out of my room, with nowhere else to go except the refuge of all the citizens similar to me with no riches; the streets... Gerald had instantaneously gifted the keys to his friend's apartment to me. ...read more.

Croft. We'd both hugely regret it later. When it finally came, I wasn't the least bit surprised. I still felt upset but my main source of sadness had come from the fact that I knew I was incapable of ever loving again. He gave me a kind, yet thin smile, that didn't quite reach his sparkling pair of sapphires this time, but I could perceive all the effort he was putting into even smiling at a time like this and I immediately adored him again, making it all the harder for me to survive this situation. I considered it necessary to clear my head (before dealing with any more heartbreak) with the cool, refreshing vapour that evaporates from the ocean when the hot fiery red ball of heat bears down upon it, glistening off its surface. Gerald offered to pay for my trip and give me loan big enough to keep me ticking over and I was in no position to refuse. It was his final donation to the "Daisy Renton Fund." ?? ?? ?? ?? Paul Earle ...read more.