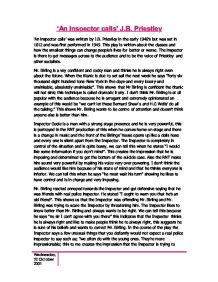 'An Inspector calls' J.B. Priestley 'An inspector calls' was written by J.B. Priestley in the early 1940's but was set in 1012 and was first performed in 1945. This play is written about the classes and how the smallest things can change people's lives for better or worse. The inspector is there to get messages across to the audience and to be the voice of Priestley and other socialists. Mr. Birling is a vey confident and cocky man and thinks he is always right even about the future. When the titanic is due to set sail the next week he says "forty six thousand eight hundred tons-New York in five days-and every luxury-and unsinkable, absolutely unsinkable". This shows that Mr Birling is confident the titanic will not sink; this technique is called dramatic irony. I don't think Mr. Birling is at all popular with the audience because he is arrogant and extremely opinionated an example of this would be "we can't let these Bernard Shaw's and H.G Wells' do all the talking." This shows Mr. Birling wants to be centre of attention and doesn't think anyone else is better than him. Inspector Goole is a man with a strong stage presence and he is very powerful, this is portrayed in the RNT production ...read more.

Birling what she would do to the boy if she were the police Inspector and the amount of blame that the boy should have. She insists that "he (the father of Eva's child) ought to be dealt with very severely". This means that Mrs. Birling thinks that the father of the baby should be more labelled as responsible than Mr. Birling. Before the Inspector leaves the Birlings' home he says "And I tell you that the time will soon come, when if men will not learn that lesson then they will be taught in fire, blood and anguish." This creates the impression that if humans don't stop being horrible they will be punished in war or maybe hell. The Inspector's warning is that humans will suffer if they make other people suffer. I think this is the voice of God because in the Inspector's final speech he says 'one body' which is used in the church meaning the congregation is one community. I also think this could be Priestley's voice because Priestley believed everyone was important like each part of the body this was because he was a socialist. The techniques used in the final speech include list of three, a perfect example of this would be "there are millions and millions and millions" ...read more.

I think if Eva was around today she would have got lots of help including; a council house, money (benefits), help with her pregnancy and with her baby. I agree with Priestley's moralistic ideas because he believes everyone is equal and should be treated equally, that money does not make you totally happy, no body is superior and that when possible we should help others, Priestley puts this idea forward through the Inspector when he said "we are reasonable for each other". This shows us that Priestley wants people to value others lives and help if you can. I think Priestley's message is still extremely important today although times have changes, and things are much better than they were, there is still room for improvement and there are many people that need help in their lives. There is still a gap between the rich and the rich don't help the poor even when they could help. In a sense the world still has many problems to do with the poor and this can result in war which does happen. The fact that war is still occurring suggests we, as a modern day audience, can learn from Priestley's message. I think an audience would respect all the messages in this play. ?? ?? ?? ?? Wednesday, 22 October 2001 ...read more.