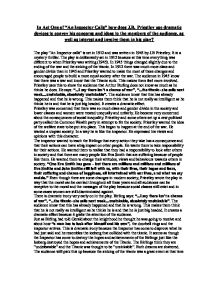 In Act One of "An Inspector Calls" how does J.B. Priestley use dramatic devices to convey his concerns and ideas to the members of the audience, as well as interest and involve them in his play? The play "An Inspector calls" is set in 1912 and was written in 1945 by J.B Priestley. It is a mystery thriller. The play is deliberately set in 1912 because at this time everything was different to when Priestley was writing (1945). In 1945 things changed slightly due to the ending of the war and the sinking of the titanic. In 1912 there was much more class and gender divide than in 1945 and Priestley wanted to make the most of these changes and encouraged people to build a more equal society after the war. The audience in 1945 know that there was a war and know that the Titanic sunk. This makes them feel more involved. Priestley uses this to show the audience that Arthur Burling does not know as much as he thinks he does. He says: "...I say there isn't a chance of war", "...the titanic- she sails next week....unsinkable, absolutely unsinkable". The audience know that this has already happened and that he is wrong. This makes them think that he is not really as intelligent as he thinks he is and that he is just big headed. ...read more.

Priestly says that the lighting should be "pink and intimate" before the inspector arrives and "brighter and harder" when he does arrive. This will automatically arouse interest from the audience and all their attention will be drawn to the inspector because his entrance has been displayed in such a dramatic way. The audience will be eager to know more about the inspector, why his presence is significant and why he is portrayed more important than the rest of the cast. The audience will assume that there is something special about the inspector and his lighting will have a great impact on the audience. There will be a lot of attention drawn to the inspector throughout the play. The lighting will also reinforce the "Iceberg" metaphor because it makes a big change and gives the impression that it has spoiled the comfortable atmosphere. Priestly describes the Inspector as "he creates at once an impression of massiveness, solidity and purposefulness. He is a man in his fifties, dressed in a plain darkish suit. He speaks carefully, weightily, and has a disconcerting habit of looking hard at the person he addresses before actually speaking." The audience will see this and automatically they will recognise him as important. His age will give the audience the impression that he is knowledgeable and wise. ...read more.

In the beginning the atmosphere seems forced. Sheila wants to know where Gerald has been all summer, Eric is agitated and nervous and Lord and Lady Croft did not come to the dinner. This arouses interest and the audience will want to know what is going on. Act 1 ends with a cliff hanger. The inspector has asked Gerald how he is involved with Eva Smith. The audience are eager to know Gerald's involvement with Eva Smith and why he really doesn't want to reveal it. In "The Inspector calls" J.B Priestley conveys his concerns and ideas to the members of the audience as well as involving and interesting them in his play by using dramatic devices. He used dramatic irony early in the play to involve them, make them seem more powerful than the cast and to show the ignorance of the Birlings. He changes the tone frequently to show the others sides of the cast members. Tension makes the audience eager to find out what happens next. The timing of some events, entrances and exits create dramatic irony, give clues to the plot, create suspense and drag the audience in even more. Subtle hints are given throughout the play that everything is not as it seems and cliff hangers are used to keep the audience interested. The mysteriousness and interesting character of the Inspector also help to interest the audience. Slowly the story of Eva's life is unravelled and these progressive revelations make the audience eager to know more. ...read more.