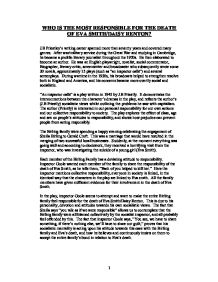 WHO IS THE MOST RESPONSIBLE FOR THE DEATH OF EVA SMITH/DAISY RENTON? J.B Priestley's writing career spanned more than seventy years and covered many genres. After war/military service during the Great War and studying in Cambridge, he became a prolific literary journalist throughout the 1920s. He then elaborated to become an author. He was an English playwright, novelist, social commentator, Biographer, literary critic, screenwriter and broadcaster who subsequently wrote some 30 novels, approximately 15 plays (such as "an inspector calls") and several screenplays. During wartime in the 1930s, his broadcasts helped to strengthen resolve both in England and America, and his concerns became more overtly social and socialistic. "An inspector calls" is a play written in 1945 by J.B Priestly. It demonstrates the interconnections between the character's dramas in the play, and reflects the author's (J.B Priestly) socialistic views whilst outlining the problems he saw with capitalism. The author (Priestly) is interested in our personal responsibility for our own actions and our collective responsibility to society. The play explores the effect of class, age and s*x on people's attitudes to responsibility, and shows how prejudice can prevent people from acting responsibly. The Birling family were spending a happy evening celebrating the engagement of Sheila Birling to Gerald Croft. This was a marriage that would have resulted in the merging of two successful local businesses. ...read more.

The night at the bar ended up in an affair between the two, "that's when it happened", as Eric described it. Eric had unknowingly caused Eva to get pregnant, which resulted in her requiring money, which she didn't have, for her and her future child. The money Eric had given her was stolen, and when she realised this, she refused to accept any more of it. Now, she was on her own, without any money, employment, and therefore lacked financial and emotional support from Eric as he left her. Eva was now a single mother. Sheila is described "as a pretty girl in her mid-twenties, very pleased with her life and rather excited" with her engagement to Gerald Croft. Sheila feels generally remorseful and seems to have learnt a lesson and accepts her involvement and how it contributed to the death of Eva Smith. She tells Gerald, "at least I'm telling the truth" unlike her parents who only see their own version of what happened. Her personality is greatly linked to the inspector's, as she feels everyone in the family as well as herself should collectively take the responsibility of Eva's death. Sheila also feels worse about what had occurred than any other member of the play "responsible". Sheila was totally appalled by the death of the girl, when she realises her tragedy, she runs out with a "little cry" and a "half-stifled snob". ...read more.

Mr Birling had sacked Eva for going on strike, and Eva's first unlucky charm had begun at this point. This had led to her ending up working at Sheila's clothes shop, where she was also sacked. Sheila could be blamed for Eva's death because she had sacked Eva due to being jealous of her looks. At this point, Eva had been sacked twice, and she lacked luck in employment ever since she had started with Mr Birling. Both Mr Birling and Eva could be blamed for Eva's death, as they both sacked her and made her lose hope in employment, and made her having to turn to prostitution. Eric could be blamed for inviting Eva to having more drinks, which got her drunk and eventually led to her pregnancy, which she couldn't afford and wasn't ready for the baby. Gerald had looked after Eva and even slept with her. He treated her as his wife and she was entirely dependant on him. The fact that he left her poses a strong blame on Gerald, as she resulted to going to the charity where she was rejected. Sybil had refused to accept Eva at her charity due to her using the Birling name, Sybil had strong beliefs in "etiquettes of society", which turned Eva down. This could be seen as the last straw to Eva's death. However, all the characters reasons to blame are inter-connected, and as socialists such as the author and inspector believe, every one is linked in society. ?? ?? ?? ?? 1 ...read more.