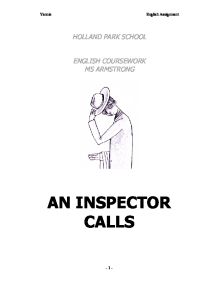 HOLLAND PARK SCHOOL ENGLISH COURSEWORK MS ARMSTRONG AN INSPECTOR CALLS An Inspector Calls The play "An Inspector Calls" written by John Boynton Priestley is about a mysterious inspector who visits a family and asks them many questions about a suicidal person, Eva Smith. The opening of the play is about a wealthy family named the Birling's who are celebrating the engagement of their daughter Sheila Birling who is getting married to Gerald Croft, whom also comes from a wealthy family too. Both families have been friendly business rivals and now Mr Birling is now looking forward for both companies to unite. An Inspector Calls was only discovered in 1944 before the Second World War, as "the mysterious inspector who visits a family". The play was first performed in 1945 even though it is set in 1912. This play is here hoping to tell the audience, and to warn us that the exploited poor will not sit and suffer; soon, they will all rise. The plays' moral is also for us to realise that as we may assume the world is pristine if the rich have the power and is at the highest in the hierarchy. But the story proves us wrong, as war breaks out in 1914. ...read more.

A normal inspector would inspect the crime scene, he would ask questions relevant to the crime, and not to do with the suspects business, unless, it was to do with his or her business, and it had a large involvement. As the involvement of each of the family becomes clear, and as the Inspector's apparent omniscience drives each of them to confession, the play reveals its second stylistic model. The morality of the story, as mentioned before is to instruct their audiences about the condition of man, caught between the religious need for goodness and temptations of evil. Throughout the entire play, he tries to get the same point across to everyone, the same point being the fact that we all need to stop the class-wars that is happening; we need to treat each other as equals. I also think that Inspector Goole also seems nothing like a real inspector because of the way he acts, he is seems to be very calm throughout and has much patience to an extent. Inspector Goole will loose his patience when he knows that something will soon happen, something bad, or even if someone is to arrive home. At one point in the play, he stresses: "I haven't much time" could this mean he knows that the real inspector could be arriving at any moment? ...read more.

As he enters the house, I think that he should not take off his hat until he is offered a seat, or if not at that point, then he should only take off his hat just after he says "Mr Birling?" this will make Mr Birling feel as if he has done something bad also. Because of the inspector's role, being not so much as an Inspector, I think that he should speak in a good manner. Therefore, when he is judging someone, they will assume it is about the Eva Smith suicide. Inspector Goole is what I would call not an inspector at all, he is there in the play to judge someone, he is there to make them think twice about their actions, but, he does inspect, he does at occasions ask very relevant questions, but only the ones which will make each character think about their role in the Eva Smith suicide. I believe that Inspector Goole is a spirit of conscience. His name implies the thought that whether or not he is a ghostly ghoul or not, but, to my belief, a ghost will cause the trouble, not make one realise the trouble. The inspector could be the conscience of one of the members of the Birling's family, they could be dreaming this and help the world change for the good, for peace. ?? ?? ?? ?? Yennie English Assignment - 1 - ...read more.