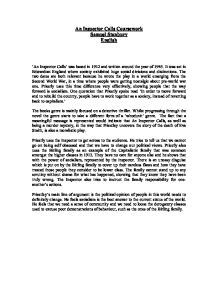 An Inspector Calls Coursework Samuel Stanbury English 'An Inspector Calls' was based in 1912 and written around the year of 1945. It was set in Edwardian England where society exhibited huge social divisions and distinctions. The two dates are both relevant because he wrote the play in a world emerging from the Second World War, in a time where people were getting nostalgic about pre-world war one. Priestly uses this time difference very effectively, showing people that the way forward is socialism. One quotation that Priestly spoke read 'In order to move forward and to rebuild the country, people have to work together as a society, instead of reverting back to capitalism.' The books genre is mainly focused on a detective thriller. Whilst progressing through the novel the genre starts to take a different form of a 'whodunit' genre. The fact that a meaningful message is represented would indicate that An Inspector Calls, as well as being a murder mystery, in the way that Priestley uncovers the story of the death of Eva Smith, is also a moralistic play. Priestly uses the Inspector to get across to the audience. He tries to tell us that we cannot go on being self obsessed and that we have to change our political views. ...read more.

An example of this is when Sheila asks where Gerald was last summer and Gerald covers this up. The secrets within the family create a huge amount of tension. Priestly also uses continuous repetition in order to build up tension, even before the Inspector arrives Mr.Birling keeps hinting that they might have done something wrong, he says 'so long as we behave ourselves'. One other example which is used is when Arthur tells Gerald about his possible knighthood, as soon as Gerald asks him when this is taking place Mr.Birling refuses to tell his son when he enters the room. It could be true that J.B.Priestly also uses accusations between the members of the family to create tension; an example of this is 'unless Eric has done something'. Overall, Priestly uses tension as a dramatic device in order to keep the audience awake, anxious and alert, and so that they are aware to his socialist message. Priestly makes use of the characters by furthering the plot with solid exits. As the scene is always in the Dining Room it takes a toll on the characters and basically tears them out of the room. The inspector shows a single photograph to Sheila, who recognizes the girl and runs away desperately. ...read more.

This keeps the audience in a state of suspense, which can also be used as a dramatic device. My last point is the climaxes at the end of each act. Sheila's dramatic exit and the Inspector waiting for his answer are two things that keep the audience engaged. I conclude that the playwright's message was to show the audience how not to live their lives and he uses dramatic devices to demonstrate this. As the story progresses we get told many things by Priestly, some of the things he does include grabbing emotions from a person. One example of this is the suicide of Eva, it reaches into the bottom of our heart. The happy family act put on by the Birlings is soon uncovered by the Inspector as the lighting shows this He makes the audience reflect over the fact that they are actually 'members of one body' and that they are all 'responsible for one another' and has made them realise that socialism is the way forward instead of capitalism. In this way, An Inspector Calls is very relevant today's society where people still do need to work together and help others in need. Priestly effectively uses many dramatic devices in An Inspector Calls, such as symbolism, timings, tension and cliffhangers. He applies them in order to portray his political views, using an upper class, Edwardian family to do so. ...read more.