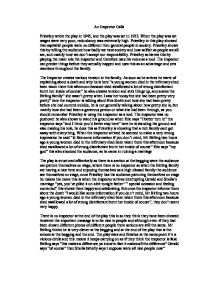 An Inspector Calls. The Inspector creates various tension in the family. As soon as he arrives he starts of explaining about a death.

An Inspector Calls Priestley wrote the play in 1945, and the play was set in 1912. When the play was set wages were very poor, redundancy was extremely high. Priestley in this play showed that capitalist people were no different then general people in society. Priestley shows this by telling the audience how badly we treat society and how selfish as people we all are, and mainly how we don't accept our responsibility. Priestley achieves this by playing the main role the inspector and therefore uses his voice as a tool. The inspector can predict things before they actually happen and uses this as an advantage and sets reactions throughout the family. The Inspector creates various tension in the family. As soon as he arrives he starts of explaining about a death and why he is here "a young women died in the infirmary shed been taken there this afternoon because shed swallowed a lot of strong disinfectant burnt her inside of course" he also creates tension and stirs things up, and scares the Birling family" she wasn't pretty when I saw her today but she had been pretty very pretty" here the inspector is talking about Eva Smith and how she had been pretty before she had commit suicide, ...read more.

There is no inspector at the end of the play this is so they think they have been cheated however the important message is to be nice to people and although even if they had been shown different photos of different people there actions are still the same. Mr Birling thinks he is very clever at the begging and at the end of the play that is the echoes at the begging and the end. The play stats and finishes at the same point it's a vicious circle and this means it keeps carrying on as if they think the inspector is fake Birling says "this makes a difference ya know in fact it makes all the difference" Gerald says "of course" then Sheila bitterly says I suppose were all nice people now" Mr Birling does use quite a lot of dramatic irony in the play one of the main ones is about the titanic "The titanic she sails next week forty six thousand eight hundred tons forty six thousand eight hundred tons new York in five days and every luxury and unsinkable absolutely unsinkable" Mr Birling is very confident throughout the play even when the inspector arrives when the inspector arrives Mr Birling say "Can I help" he is trying to be on top. ...read more.

Inspector acts as a catalyst as he ruins family relationships. The inspector acts as a catalyst as he turns the Birling family into to sides, one side as the Mr and Mrs Birling there view on this is they want to keep the family reputation high and want to be seen as high class people the other side is honesty as Shelia & Eric confess to what they have done even after the inspector has gone and been named a fraud. After the Inspector has been 'so' identified a fraud, tension is still high as Shelia and Eric were pleading guilty that they had treated somebody badly maybe not an 'Eva smith', as the inspector may have shown different photos to them both but they had treated 'somebody' badly, and they feel bad. the audience here is shown that you only realise what your doing bad until it has a negative approach on your 'reputation' or just effects you in anyway. After this another 'inspector' is on the phone and now most of the audience believe this as the real inspector and Eric and Sheila are ready to tell the truth, this inspector which is calling is the cliffhanging end to the inspector calls. The play ends in the midst of this tension and leaves the audience wanting to know more, this phone call is known as the donovment. ...read more.