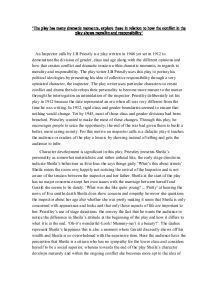 An Inspector Calls. The play has many dramatic moments, explore these in relation to how the conflict in the play shows morality and responsibility

'The play has many dramatic moments, explore these in relation to how the conflict in the play shows morality and responsibility' An Inspector calls by J.B Priestly is a play written in 1946 yet set in 1912 to demonstrate the division of gender, class and age along with the different opinions and how that creates conflict and dramatic tension within dramatic moments, in regards to morality and responsibility. The play writer J.B Priestly uses this play to portray his political ideologies by presenting his idea of collective responsibility through a very opiniated character, the inspector. The play writer uses particular characters to create conflict and drama then develops their personality to become more mature to the matter through the interrogation an intimidation of the inspector. Priestley deliberately set his play in 1912 because the date represented an era when all was very different from the time he was writing. In 1912, rigid class and gender boundaries seemed to ensure that nothing would change. Yet by 1945, most of those class and gender divisions had been breached. Priestley wanted to make the most of these changes. Through this play, he encourages people to seize the opportunity; the end of the war had given them to build a better, more caring society. For this motive an inspector calls is a didactic play it teaches the audience or readers of the play a lesson by showing instead of telling and gets the audience to infer. Character development is significant in this play. Priestley presents Sheila's personality as somewhat materialistic and rather airhead like, the early stage directions indicate Sheila's behaviour as frivolous she says things gaily 'What's this about streets' ...read more.

A good deal conflict is being created here towards the idea of morality and responsibility. The stage directions that Priestly writes are very descriptive he clearly indicates how they should move, speak and act. The amount of detail that the play writer puts in his stage directions tell us how much Priestly was involved in the directing of his play. The detailed stage directions allow the reader to infer, which is going back to the concept of 'An Inspector Calls' being a didactic play. The stage directions are like instructions at the beginning where Priestley almost dictates how the setting should be. The stage direction regarding the lighting creates a lot of dramatic tension 'The lighting should be pink and intimate until the Inspector arrives and then it should be brighter and harder'. Priestley wants the lighting relaxed and tranquil creating a happy and joyous atmosphere where the Birling family are celebrating the words 'pink and intimate' suggesting an intimate and unperturbed ambience. Whereas, when the inspector arrives the lighting should be 'brighter and harder' suggesting the atmosphere is tenser and the inspector brings about an air of authority the lighting becoming harsher. The lighting instructed for the inspector brings about the image of a harsh, bright and uncomfortable police light used when people are under intense questioning sessions. The stage directions, telling the characters where to sit already advocate their status in the family 'Arthur Birling at one end, his wife at the other, Eric downstage and Sheila and Gerald are seated upstage'. The positions of Arthur and his wife suggest something different about the Birling family. ...read more.

Another key moment is the inspectors final words to the Birling family. 'One Eva Smith is gone but millions and millions and millions of Eva Smiths and John Smiths left with us...We are members of one body. We are responsible for each other...If men will not learn their lesson then they will be taught it in fire and blood and anguish'. The inspector ends on an intense note his final words harshly said. When he says 'fire and blood and anguish' perhaps that is Priestley talking from the 1940 era meaning maybe men will learn from their mistakes through the war. Priestley was disappointed that it took two world wars to correct society the inspector also mentions responsibility which is a key concept of the play. An Inspector Calls is a play which teaches an important moral lesson to either the audience or the reader showing them the vicious circle of not taking responsibility for one another and living as a selfish egotistic being. The experience that the Birling family go through is an example of things that still go on if collective responsibility is not taken on board. Priestley used this play to voice his opinions on how society should run and the consequences of not doing it properly. J.B Priestley's political ideologies are presented well throughout the play the most effective one through the inspectors last words it was a great shame that it took two world wars for gender roles to become more equal and for the distinctions between upper and lower class to become less clear. He uses character development, the age divide, significant stage directions, gender and a wide range of dramatic devices to explore the conflict in the play and how It links to morality and responsibility. ...read more.