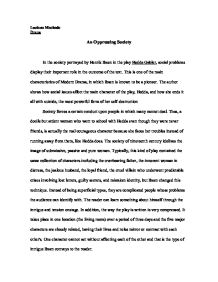 Luciana Machado Drama An Oppressing Society In the society portrayed by Henrik Ibsen in the play Hedda Gabler, social problems display their important role in the outcome of the text. This is one of the main characteristics of Modern Drama, in which Ibsen is known to be a pioneer. The author shows how social issues affect the main character of the play, Hedda, and how she ends it all with suicide, the most powerful form of her self-destruction Society forces a certain conduct upon people in which many cannot deal. Thea, a docile but ardent woman who went to school with Hedda even though they were never friends, is actually the real courageous character because she faces her troubles instead of running away from them, like Hedda does. The society of nineteenth century idolizes the image of submissive, passive and pure women. Typically, this kind of play contained the same collection of characters-including the overbearing father, the innocent woman in distress, the jealous husband, the loyal friend, the cruel villain who underwent predictable crises involving lost letters, guilty secrets, and mistaken identity, but Ibsen changed this technique. ...read more.

(act 1, pg 131) In George Tesman, Hedda found both the perfect solution to her situation of the tedious single's life and the inevitable curse of boredom and annoyance. George, who was brought up by his aunts, has a worn-out conversation constantly ending his sentences with the word "Eh", something that gives away his weak character. He is completely ignorant to delicacy; failing to notice Aunt Julia's suggestive questions about Hedda's pregnancy. He is dedicated to his studies, having spent his honeymoon researching "marvelous old documents that nobody knew existed". It is with her marriage to George that Hedda's life of monotony and boredom increasingly hurts her personality and livelihood. She declares: "I often think there is only one thing in the world I have turn for... boring myself to death!" (Act 2, pg 147) and becomes obsessed with the task of finding interest and beauty in her life. To find the interest and beauty she desires, Hedda must turn to others. Living as a bourgeois and as a woman in a patriarchal society, she can have no influence on the future of her community and that is probably why she decides to maintain everything under her control. ...read more.

From the ungraceful death of Lovborg and Tesman's plan to dedicate his life to the restoration of Lovborg's book place added stress on Hedda. The event which finally drives Hedda to take her own life, though, is the thought of Brack having power over her. The protagonist does not suffer badly and Ibsen does not make the reader feel that Hedda is vulnerable, and only afraid of facing society. The pistol, a theme that is constantly present in the text, represents a mean used to overcome, persuade, or even the get the better of another. The pistol is a fire weapon very similar to Hedda's wishes of burning Thea's beautiful hair (meanwhile, Hedda's hair is medium brown, not at all abundant). Through Brack's blackmail involving the pistol and the added gripe of knowing that she would have to spend every evening with that man. Hedda and Brack's conversation in the final act have gone completely monosyllabic (completely pragmatic) as the tension mounts up and Hedda confesses that she would rather die than to live in the hands of Brack. He ironically says: "People say such things but they don't do them." (Act 4, pg 172) Hedda cannot survive with this and ends her life beautifully with a shot to the head. ...read more.