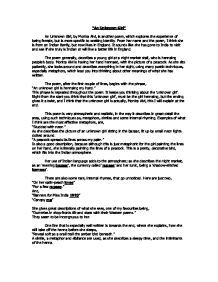 An Unknown Girl, by Moniza Alvi - the experience of being female &amp; seeking identity

"An Unknown Girl" An Unknown Girl, by Moniza Alvi, is another poem, which explores the experience of being female, but is more specific to seeking identity. From her name and the poem, I think she is from an Indian family, but now lives in England. It sounds like she has gone to India to visit and see if she truly is Indian or will live a better life in England. The poem generally, describes a young girl at a night market stall, who is hennaing people's body. Moniza Alvi is having her hand hennaed, with the picture of a peacock. As she sits patiently, she looks around and describes everything in her sight, using many poetic techniques, especially metaphors, which lead you into thinking about other meanings of what she has written. The poem, after the first couple of lines, begins with the phrase, "An unknown girl is hennaing my hand." ...read more.

Her use of Indian language adds to the atmosphere; as she describes the night market, as an 'evening bazaar', the currency called 'rupees' and her tunic, being a 'shadow-stitched kameez'. There are also some rare, internal rhymes, that go unnoticed. Here are just two, "On her satin-peach knee" "For a few rupees." And, "Banners for Miss India 1993" "Canopy me" She gives great descriptions of what she sees, one of my favourites being, "Dummies in shop-fronts tilt and stare with their Western perms." They seem to be incongruous to her. One line that is especially well written is towards the end, where she explains, how she will take off the henna before she sleeps, "Reveal soft as a snail trail the amber bird beneath." A simile, a metaphor and sibilance are used, as she describes a sleepy time, and the intimitants of the henna. She doesn't use punctuation often, dis-obeying the rules, as she misses capital letters after full stops, but enjambment is used a lot instead. ...read more.