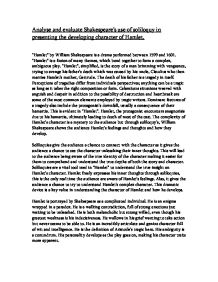 Analyse and evaluate Shakespeare(TM)s use of soliloquy in presenting the developing character of Hamlet.

Analyse and evaluate Shakespeare's use of soliloquy in presenting the developing character of Hamlet. "Hamlet" by William Shakespeare is a drama performed between 1599 and 1601. "Hamlet" is a fusion of many themes, which bond together to form a complex, ambiguous play. "Hamlet", simplified, is the story of a man brimming with vengeance, trying to avenge his father's death which was caused by his uncle, Claudius who then marries Hamlet's mother, Gertrude. The death of his father is a tragedy in itself. Perceptions of tragedies differ from individuals perspectives; anything can be a tragic as long as it takes the right composition or form. Calamitous situations weaved with anguish and despair in addition to the possibility of destruction and heartbreak are some of the most common elements employed by tragic writers. Dominant features of a tragedy also include the protagonist's downfall, usually a consequence of their hamartia. This is evident in "Hamlet". Hamlet, the protagonist encounters anagnorisis due to his hamartia, ultimately leading to death of most of the cast. The complexity of Hamlet's character is a mystery to the audience but through soliloquy's, William Shakespeare shows the audience Hamlet's feelings and thoughts and how they develop. ...read more.

He feels as though she is moving on too quickly. Hamlet seems to be trapped in the memory of his father, he doesn't seem to be completely grief ridden but it seems like he wants to reminisce his father's existence. He wants to be close to his mother too, and he feels like it's her duty to mourn. Going into another relationship so abruptly leaves Hamlet feeling as though she felt nothing towards her father. Hamlet believes all the tears she cried for him must therefore be fake. 'Ere yet the salt of most unrighteous tears/ Had left the flushing in her galled eyes' She doesn't deserve to mourn, in Hamlet's eyes. Hamlet at this point in the play is experiencing melancholia. He is grieving and is faced with more problems. This soliloquy helps us understand what Hamlet is feeling about the situation. Hamlet at this point is still an enigmatic character although he is showing his frustration quite clearly; he is yet to act upon his feelings and is trapped within his mind. Although he is feeling great annoyance towards the whole situation he hasn't confronted his mother about it yet. ...read more.

He thinks if he kills Claudius now, his crime will go unpunished. Hamlet wants to ensure Claudius gets what he deserves: damnation. He feels like it is his duty to fulfil this. 'Then trip him, that his heels may kick at heaven, / And that his soul may be as d**n'd and black / As h**l, whereto it goes.' He wants to make sure there is no way Claudius will go to heaven. 'O, this is hire and salary, not revenge.' This is not something Hamlet sees as revenge, but something he must do, something compulsory. These three soliloquies demonstrate Hamlet's character and it shows his character development also. They portray his indecisiveness; he doesn't know when to kill Claudius. As he leaves it to the very end to take action the play ends in tragedy, naturally. He becomes more and more aware of his "duty" and feels the need to have to take Claudius's life. Although Hamlet's character seems to feign insanity by the end of the play Hamlet's negative mind is definitely over powering him which leads to his mental breakdown. The soliloquies are successful in showing this as the audience get to see the slow progression of his insanity and how his character fully develops. ...read more.