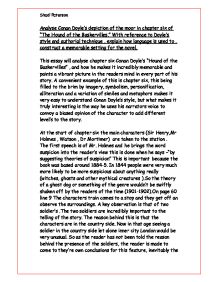 Analyse Conan Doyles depiction of the moor in chapter six of The Hound of the Baskervilles. With reference to Doyles style and authorial technique , explain how language is used to , construct a memorable setting for the nove

Analyse Conan Doyle's depiction of the moor in chapter six of "The Hound of the Baskervilles." With reference to Doyle's style and authorial technique , explain how language is used to , construct a memorable setting for the novel. This essay will analyse chapter six Conan Doyle's "Hound of the Baskervilles" , and how he makes it incredibly memorable and paints a vibrant picture in the readers mind in every part of his story. A convenient example of this is chapter six, this being filled to the brim by imagery, symbolism, personification, alliteration and a variation of similes and metaphors makes it very easy to understand Conan Doyle's style, but what makes it truly interesting is the way he uses his narrators voice to convoy a biased opinion of the character to add different level's to the story. At the start of chapter six the main characters (Sir Henry,Mr Holmes , Watson , Dr Mortimer) are taken to the station . The first speech is of Mr. Holmes and he brings the word suspicion into the reader's view this is done when he says -"by suggesting theories of suspicion" This is important because the book was based around 1884-5. In 1844 people were very much more likely to be more suspicious about anything really (witches, ghosts and other mythical creatures ).So the theory of a ghost dog or something of the genre wouldn't ...read more.

are in London you are less inclined to think they would get shot in play day while in the moors you could imagine it. Throughout this chapter the reader is immersed in the plot. This part of the story is especially important because it is the turning point in the story. The starting point of the story with the setting of the scene, and is incredibly significant as this is where the murders happened. It fits into the overall plot by being the main setting for the story where if any action would be expected to happen it would be here. This is all represented by the smart use of a transition. The transition being the shift of settings from London to Devonshire and starts by getting on the train and ends by getting of the train. The transition is uttered when they get of the train and the author writes -'Our coming was evidently a great event' this in its entirety explains that this point in the story is very important. Throughout chapter six the plot, theme, and setting are represented through Conan Doyle's literary techniques. One example of this is the use of dialect and slang used -'Halloa' is not only a specific dialect usually used by 'Londoners' but slang for hello. ...read more.

Where it's written the green square, is a simple use of symbolism by the green squares representing the farmed fields from far away. Also the hills are described as melancholy. The use of this adjective gives the hill a human personality because of the human emotions involved. For a person to be melancholy they should be in a gloomy state of mind so for a hill to be melancholy is well, impossible. So taken into account the human description of melancholy then for a hill to be melancholy it could be depressed or even give of a saddening impression. As well as this the word 'melancholy' and 'jagged' is repeated through out this chapter and the story to describe the hill/moor , this is a use of repetition. The use of repetition reinforces the desired outcome for the readers. The whole quote represents imagery as it is represented vividly and can be easily pictured through the use of Conan's words. So to come to a or conclusion I deem that despite the fact that the book was written a century ago the book nevertheless holds relevance , and in my eyes Conan still manages to portray his settings in which ever way he feels necessary by assembling a work of art in the word form. Shadi Paterson ?? ?? ?? ?? Shadi Paterson ...read more.