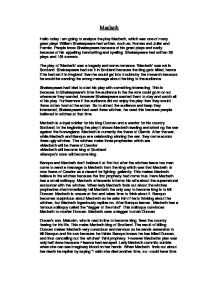 Macbeth Hello today I am going to analyse the play Macbeth, which was one of many great plays William Shakespeare had written, such as, Romeo and Juliet and Hamlet. People know Shakespeare because of his great plays and sadly because of his appalling handwriting and spelling. Shakespeare had written 38 plays and 154 sonnets. The play of 'Macbeth' was a tragedy and some romance. 'Macbeth' was set in Scotland. Shakespeare had set it in Scotland because the king gets killed, hence if he had set it in England then he would get into trouble by the monarch because he would be sending the wrong message about the king to the audience. Shakespeare had tried to start his play with something interesting. This is because; in Shakespeare's time the audience in the theatre could go in or out whenever they wanted, however Shakespeare wanted them to stay and watch all of his play. Furthermore if the audience did not enjoy the play then they would throw rotten food at the actors. So to attract the audience and keep they interested, Shakespeare had used three witches, he used this because people believed in witches at that time. Macbeth is a loyal soldier for his king Duncan and a warrior for his country Scotland, in the beginning the play it shows Macbeth leading and winning the war against the Norwegians. Macbeth is currently the thane of Glamis. After the war, while Macbeth and Banquo are celebrating winning the war, they come across three ugly witches. ...read more.

'I have thee not, and yet I see thee still.' Macbeth can't touch it only see it. He is puzzled. 'Art thou not, fatal vision, sensible to feeling as to sight?' Macbeth is asking a question to the dagger so the audience can imagine it is on stage. 'Or art thou but a dagger of the mind, a false creation.' Macbeth is saying if it is only his imagination. 'Proceeding from the heat oppressed brain?' Macbeth thinks that the dagger that has appeared could be a trick of his imagination, probably he has a fever. 'I see thee yet, in form a palpable.' Macbeth is saying that the dagger looks as real as the one he is about to draw. This is also a stage direction. 'Thou marshall'st me the way that I was going; And such an instrument I was going to use.' In this line Macbeth accepts that the dagger was a sign and that the dagger is guiding him to the place he was going to go. 'Mine eyes are made the fools o' the other senses, or else worth all the rest.' Macbeth is saying either his eyes are not working or is eyes are the only one working. 'I see thee still.' Macbeth can still see the dagger. 'And on thy blade and dudgeon gouts of blood.' Macbeth heart beats faster when suddenly blood appears to be dripping from the blade and handle. 'Which was not so before. There's no such thing.' ...read more.

"My hands will rather the multitudinous in incardine." He thinks rather than the ocean washing the blood off the blood will fill the ocean. This means that the clean, pure water will become dirty, corrupt water. This will turn everyone corrupt when Macbeth is crowned king. Lady Macbeth re-enters after doing her job. She says that her hands are the same colour but she is not afraid and does not have a pale heart. They hear knocking in the south chamber so they quickly go to their bedroom. Lady Macbeth says a little water will clear their deed. This shows she is practical and confident. They decide to wear there night gowns so it will look like they were in there bedroom the whole time. This shows that Lady Macbeth is braver and isn't guilty. Macbeth agrees saying that he rather be asleep or unconscious then to think about what he has done. He then hopes that the knocking would wake Duncan. This shows that he regrets killing Duncan. Here Act 2 scene 2 finishes. In the later acts of the play Macbeths and lady Macbeths Personalities almost switch around, with Lady Macbeth becoming guilty and Macbeth killing anyone for power. I think Lady Macbeth was the main culprit for the murder of Duncan because she wanted fame and fortune, Macbeth was just her puppet. On the other hand people might argue that she was only doing it because she loves he husband and want his dreams and ambitions to come true. I think themes like greed; fame and fortune are still around today because people still go against the government and monarch for the same reasons as 'Macbeth'. ...read more.