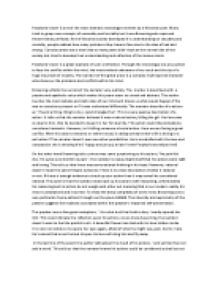 ﻿Porphyria's lover is one of the most dramatic monologues written by a Victorian poet. Many tried to grasp new concepts of sensuality and brutality but it was Browning who captured these themes perfectly. As the Victorian society developed it's understanding on sexuality and morality, people realized how many problems they have to face due to the idea of bad and wrong. Consciousness was a new idea so many poets didn't look at the normal side of the society but tried to develop their understanding and reflection of the insane minds. Porphyria's lover is a great example of such a reflection. Through the monologue we are pushed to face the conflict within the mind, the most twisted endeavors of our souls and the tip of a huge mountain of insanity. ...read more.

This action could theoretically be considered romantic. However, isn't killing someone a brutal action. Here we are facing a great conflict. Were his actions romantic or rather brutal, is taking someone else's life a loving or a evil action? The narrator doesn't even see other possibilities. He is so satisfied with the love and compassion she is showing him ( 'happy and proud; at last I knew Porphyria worshiped me') On the other hand Browning tells us there was some questioning to his actions. 'No pain felt she, I'm quite sure she felt no pain' - the narrator is reassuring himself that his actions were right and loving. This tells us that there was some rational thinking in his head. ...read more.

A beautiful flower has died with his love hidden inside. It is now not visible so he opens her eyes again, afraid of what he might see; pain, horror, hate. He's scared that once the bud id open his love will sting him and fly away. In the last line of the poem the author talks about the result of his actions, ' and yet God has not said a word'. This tells us that the narrator knows his actions could be considered as bad but yet no one has done anything. No one stopped him from doing what he had done therefore it was right. This also indicated that our speaker is religious and is scared aware of heaven and h**l, this could suggest that to hold Porphyria's love and passion was so dear to him it was worth more than being a good man or going to heaven. by Hanna Gebicka 11f ...read more.