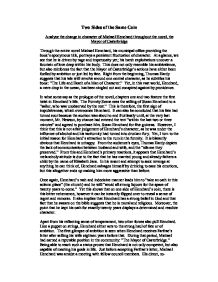 Analyse the change in character of Michael Henchard throughout the novel, the Mayor of Casterbridge

Two Sides of the Same Coin Analyse the change in character of Michael Henchard throughout the novel, the Mayor of Casterbridge Through the entire novel Michael Henchard, his municipal office providing the book's eponymous title, portrays a persistent fluctuation of character. At a glance, we see that he is driven by rage and impetuosity yet; his harsh exploitations uncover a fountain of love deep within his body. This does not only resemble his ambivalence, but also reinforces the fact that the Mayor of Casterbridge's actions have either been fuelled by ambition or just led by fate. Right from the beginning, Thomas Hardy suggests that his tale will revolve around one central character, as he subtitles his book: "The Life and Death of a Man of Character." Yet, in this vast world, Henchard, a mere drop in the ocean, has been singled out and conspired against by providence. In what some say as the prologue of the novel, chapters one and two feature the first twist in Henchard's life. The Furmity Scene sees the selling of Susan Henchard to a "sailor, who was unobserved by the rest." This is therefore, the first sign of impulsiveness, which overcomes Henchard. It can also be concluded that his fate had turned sour because the auction was about to end fruitlessly until, at the very last moment, Mr. Newson, by chance had entered the tent "within the last two or three minutes" and agreed to purchase Mrs. Susan Henchard for five guineas. However, I think that this is not a fair judgement of Henchard's character, as he was under the influence of alcohol and his taciturnity had turned into drunken fury. Yet, I turn to the initial reason for Henchard's attraction to the rum in the furmity. It is blatantly obvious that Henchard is unhappy. From the audience's eyes, Thomas Hardy depicts the lack of communication between husband and wife, and the "silence they preserved." ...read more.

This decision shows that Henchard is still moral. We are made to feel sympathetic towards Henchard when he realises that he is alone at home again. His appointment of Farfrae as his manager was disrupted by his jealousy. His resentment of a family made him give up love for ambition. He thought he could be happy when Susan returned, yet she died not long after their reunion. Elizabeth Jane, whom he had willingly loved, was turned against him after his envious rage belittled her. However, the moment he audience grasp the fact that Henchard has lost his daughter, among many other things that could go wrong with his life, Hardy's emotional detail gives us a real insight into Michael Henchard's true character, his fight to make amends and to repair a guilty conscience. Nevertheless, his status in the community overcame the love he felt for his daughter. Henchard suffered embarrassment at the poor quality of Elizabeth Jane's broken English and instead of trying to comfort her and help her improve, he mocked her. The constant jeering and taunting showed a cruel side of Henchard. He not only lowers Elizabeth Jane's confidence and self esteem, but he does this as a way to retaliate against the lying, which has held him back from the truth. The resurfacing of Lucetta was one of the main reasons for Henchard's demise. He had all hope of regaining control of his life. He had compensated everything and started to rebuild his relationship with Susan. His business was thriving with the help of his most trusted friend: Donald Farfrae. He had also found another type of love: the love for his daughter, Elizabeth Jane. However, due to the tight control fate had on his life, the importance of letters struck once again. In her dying days, Susan Henchard had written Michael a letter to tell him of her betrayal. This led to unforeseen hate and anger. ...read more.

Being an itinerant hay-trusser, Henchard was still curious but looking out for his stepdaughter. To make amends and renew Elizabeth Jane and Farfrae's trust, Henchard returns for their wedding with a sign of peace: "a caged gold-finch." Yet, instead of this being a final good-willed act, Henchard ran away from his encounter with Elizabeth Jane, to live a solitary life until his death. With a final verdict on Henchard, I believe that his benevolence was enough to have Abel Whittle still looking after him, even though he had mistreated him. Henchard's pride also fell with him when he wished in his will that no one should "be told of his death" and "no man remember him or mourn for him." Overall, I feel that Hardy has presented him as a tragic hero. His quarrelsome and angry nature is attacked with kind acts. Through the entire novel, it is either the good or bad in Michael Henchard that takes over. Sometimes the rash impetuosity will triumph, but his regret and desire to make amends will equal that out. His isolation and substitution for love (ambition) makes his social life an unimportant part of his actual life. His alienation is the beginning of his downfall, "the world seems to have the blackness of hell." Henchard's success is shadowed by his repeated absence in the face of misfortune. He plans his own destruction by persuading Farfrae to stay in Casterbridge, and when all other contact fails, hopelessly clings onto Lucetta, Elizabeth-Jane and Jopp. Adversity doesn't let Henchard keep his emotions under control, because his feelings are intensified in hundreds. His hate turns into pure loathing, but his affection turns into infatuation. Thomas Hardy does intend us to sympathise with Henchard, despite his flaws. His catastrophic end, heart-breaking love, the flair for ambition and the leash-like hold of fate. Henchard's life's choices have the fifty-fifty percent probability of a coin. Good or bad, fate or ambition; the coin decides. ?? ?? ?? ?? ...read more.