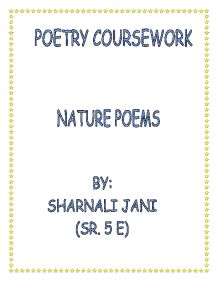 Keats has presented the nightingale to his readers in a very favourable light. This is because according to Keats, the bird had served royalty and has forever existed. He sees the nightingale as an image of infinity. In a way, Keats pines to be in place of the bird because it expresses itself in an extremely graceful and melodious way. To Keats, the season of autumn is also figurative as it is like an ideal dream. Keats has depicted autumn as a season which is forever "conspiring" about "how to load and bless" life. We notice that it is not really nature that needs the blessings of autumn but Keats' own life. The fruits which have been filled with a "ripeness to the core," pose a paradox to Keats' life which is supposed to be unfruitful and unproductive. Even the west wind used in Shelley's poem symbolizes the winds of change. Since Shelley has the enthusiasm to change the world, he summons the autumn wind to help him being over this change. Shelley wants to recognize himself as the master of the seasons. He is like a lion tamer who wants the "ferocious" winds to respond to his command. To Shelley the skylark is symbolic to freedom and symphony. In the poem, Shelley marvels the grace and elegance of the skylark. According to Shelley, the skylark "showers a rain of melody." The skylark can be compared to the bird in Shelley's own mind which wants to venture to unseen areas and which wants to explore the different highs and lows of human nature. ...read more.

Keats also notices the bare beauty in the colours of autumn and personifies it as a maiden whose "hair soft-lifted by the winnowing wind." This alliterative phrase brings out the gentleness of autumn and also reveals that Keats has blended the multiple techniques of personification, alliteration as well as the sense of sight. In conclusion, these poems are interwoven with the deepest human thoughts. Even though they have been written with subtlety they convey the thoughts, the views of life and the perspectives of the poets. In addition they also teach us to adore and admire God's creative genius and artistry. Through the poems we learn that in life there are many things that we ignore and even take for granted. Therefore these poems give the message that we have to start taking notice of things and start valuing all we have before it starts slipping. Even though these poems have been written way back in the eighteenth century, they still hold a lot of relevance in today's age. They pose a paradox for the older generation who worshipped and noticed every shade of nature against the newer and more unconventional times where nature is just another object. The nature, which has inspired millions of romantics, poets, art-lovers and even writers, is now widely subject to devastation from all areas such as widespread air pollution, the greenhouse effect and the overall to destruction of the ecology. Thus the poems instill in us a sense of responsibility not only towards nature but every creation of God. The two poets reach out to different depths of the human mind and give us some eternal and timeless messages of life and its various manifestations. "Everything in life is speaking in spite of its apparent silence." (Hazrat Inayat Khan) ...read more.