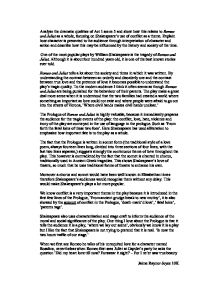 Analyse the dramatic qualities of Act 1 scene 5 and show how this relates to Romeo and Juliet as a whole, focusing on Shakespeare(TM)s use of conflict as a theme. Explain how character is presented to the audience through interpreta

Analyse the dramatic qualities of Act 1 scene 5 and show how this relates to Romeo and Juliet as a whole, focusing on Shakespeare's use of conflict as a theme. Explain how character is presented to the audience through interpretation of character and action and describe how this may be influenced by the history and society of the time. One of the most popular plays by William Shakespeare is the tragedy of Romeo and Juliet. Although it is about four hundred years old, it is one of the best known stories ever told. Romeo and Juliet tells a lot about the society and times in which it was written. By understanding the contrast between an orderly and disorderly one and the contrast between true love and the pretence of love it becomes possible to understand the play's tragic quality. To the modern audience I think it often seems as though Romeo and Juliet are being punished for the behaviour of their parents. The play make a great deal more sense when it is understood that the two families had created a world where something as important as love could not exist and where people were afraid to go out into the streets of Verona, 'Where civil hands makes civil hands unclean.' The Prologue of Romeo and Juliet is highly valuable, because it immediately prepares the audience for the tragic events of the play: the conflict, love, hate, violence and irony of the play are conveyed in the use of language in the prologue. ...read more.

Tybalt is included in yet another contrast; age and youth. The contrast is represented in the characters of Tybalt and Capulet. The conflict between Tybalt's rashness and Capulet's patience is probably the biggest conflict in the scene. As soon as Tybalt hears Romeo and recognises that he is a Montague he immediately wants to kill him, but the surprising things is that Capulet talks about Romeo in a good way: 'Verona brags of him To be a virtuous and well-governed youth.' This is quite shocking because Capulet should hate Romeo. However Capulet does suggest that he may allow him to kill Romeo later. 'Here in my house do him disparagement Therefore be patient, take no note oh him.' Capulet says this because he has two very different sides to his personality; public and private. We see these two sides at the party when Shakespeare's structure of Capulet's speech. Shakespeare's use of dashes are used 'o break up the distinct sides of Capulet's speech.' He is talking to the servants as well as Tybalt. He is cheerful and happy with the servants and dancers '-Cheerily my hearts', but then at the same time he is angry and threatening towards Tybalt: 'I'll make you quiet!' We also see the power Capulet has, 'Am I the master here, or you? Go to!' This scene is made appealing to his audience with the use of dramatic irony. ...read more.

Although the play is about four hundred years old, writers still use aspects of the play in their own writing, such as 'West Side Story'. That story is based on Romeo and Juliet. There is the hate between the two gangs, (Jets and Sharks) whereas in Romeo and Juliet it is the hate between two families, (Capulets and Montagues). As well there is a forbidden love between Tony from the Jets and Maria from the Sharks. This is obviously a take on the relationship between Romeo and Juliet. There are many more storylines based on Romeo and Juliet, which shows how popular the play was and still is. Equally the fact that this play is studied in schools shows just how Shakespeare's popularity has continued right to the present day. Romeo and Juliet is by far my favourite Shakespearean play. I think the storyline is fantastic and I love the themes included in the play. But the thing I love most about this play is the poetic language, there is a lot of hate and death in this play but the language still makes the speech sound beautiful. 'Never was a story of more woe, Than this of Juliet and her Romeo.' I think that rhyming couplet sums up the whole play and although that the lines say that there is no story with more sadness, I still think it sounds beautiful! However I do think that Elizabethan audiences would have had a different opinion, this is because they would have recognised the language whereas now Shakespeare's language has to be studied to fully understand. ?? ?? ?? ?? Jaime Raynor-Joyce 10K ...read more.