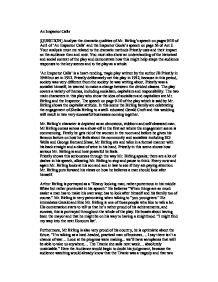 An Inspector Calls [QUESTION] Analyse the dramatic qualities of Mr. Birling's speech on pages 9/10 of Act1 of 'An Inspector Calls' and the Inspector Goole's speech on page 56 of Act 3. Your analysis must me related to the dramatic methods Priestly uses and their impact on the audience then and now. You must also show an understanding of the historical and social context of the play and demonstrate how this might help shape the audience responses to the key scenes and to the play as a whole. 'An Inspector Calls' is a heart-rending, tragic play written by the author JB Priestly in 1944 but set in 1912. Priestly deliberately set this play in 1912, because in this period, society was very different from the society he was writing about. Priestly was a socialist himself, he wanted to make a change between the divided classes. The play covers a variety of themes, including socialism, capitalism and responsibility. The two main characters in this play who show the idea of socialism and capitalism are Mr. Birling and the Inspector. The speech on page 9-10 of the play which is said by Mr. Birling shows the capitalist attitude. In this scene the Birling family are celebrating the engagement of Sheila Birling to a well- educated Gerald Croft and this wedding will result in two very successful businesses coming together. ...read more.

I personally think that if a younger audience was to watch this play they would agree with Mr. Birling because today society is more or less as Mr. Birling describes. However if we look at an audience who are older and grew up at that time, they will more or less disagree with what Mr. Birling says, as society in those times were hard and people cared about each other and left more of a community spirit. Violence was much less prolific and therefore people enjoyed other people's company. Young children were allowed out without their parents worrying about them being kidnapped or raped or even murdered. As soon as Mr Birling has said "a man has to look after himself and his own family" there is a knock at the door, the timing is crucial. The Inspector is shown as a very mysterious and odd like figure throughout the whole play. The Inspector has many messages to share throughout his last speech. He gives the message that 'one Eva smith has gone- but there are millions and millions and millions of Eva Smiths and John Smiths.' Here the Inspector is telling the Birling family that although one Eva Smith has died, there are plenty more Eva Smiths and John Smiths in the world. In this speech Priestly is referring to "John" as Adam. ...read more.

I think that Priestly has chosen to set his play in the year 1912 before the Titanic had sunk to show how VERY foolish Mr. Birling is. When Priestly wrote this play it was after the end of the Second World War. 55 million people died and still the world carried on the way it had been before the wars. This is why I think Priestly has set the play in an earlier time to show the audience that even after the deaths of many innocent people; we still refuse to change or to take responsibility for each other. This play was first performed in a theatre in Moscow, as it couldn't be performed in London at that time because of the effects of the Blitz. I think that Priestly did this on purpose as then the audience could see in to the future and see a more positive society. In my opinion I think that the play has a message for everybody. That being responsible will not only make you a better person as a whole and give you a peaceful afterlife but will also help all the Eva and John Smiths in the world, because "there are many millions and millions and millions of people like John and Eva" as the Inspector stated on page 56/57 of the play "An Inspector Calls". An Inspector calls is about community and responsibility, with many themes such as morality, capitalism, responsibility and socialism. ...read more.