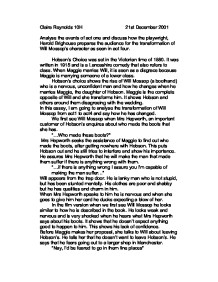 Analyse the events of act one and discuss how the playwright, Harold Brighouse prepares the audience for the transformation of Will Mossop's character as seen in act four of Hobson's Choice.

Claira Reynolds 10H 21st December 2001 Analyse the events of act one and discuss how the playwright, Harold Brighouse prepares the audience for the transformation of Will Mossop's character as seen in act four. Hobson's Choice was set in the Victorian time of 1880. It was written in 1915 and is a Lancashire comedy that also refers to class. When Maggie marries Will, it is seen as a disgrace because Maggie is marrying someone of a lower class. Hobson's choice shows the rise of Will Mossop (a boothand) who is a nervous, unconfident man and how he changes when he marries Maggie, the daughter of Hobson. Maggie is the complete opposite of Will and she transforms him. It shows Hobson and others around them disagreeing with the wedding. In this essay, I am going to analyse the transformation of Will Mossop from act1 to act4 and say how he has changed. We first see Will Mossop when Mrs Hepworth, an important customer of Hobson's enquires about who made the boots that she has. "...Who made these boots?" Mrs Hepworth seeks the assistance of Maggie to find out who made the boots, after getting nowhere with Hobson. ...read more.

Hobson summons Will and goes to hit him with a belt. However will stands up to Hobson and tells him that it wasn't his idea to marry Maggie, it was the other way around and then threatens Hobson by saying that if he hits him he will walk out with Maggie. " I'm none wanting thy Maggie, it's her that's after me. But I'll tell you this, Mr Hobson: if you touch me with your belt, I'll take her quick, aye, and stick to her like glue." This shows that Maggie has already started to change Will. He has stood up to Hobson, something that he wouldn't have done when we first saw him. He has gained confidence from what has been happening to him. In act 2 and 3 we see more changes in Will as time goes by. At the end of act2 when Maggie and Will are leaving to get married Will shows that he is now one hundred percent sure that he is going to get married to Maggie. Maggie gives him the chance to back out but he stands strong and tells her that he is sure that he truthfully wants to go through with it. ...read more.

He tells Hobson straight and stands up to Maggie about the name the shop will have. " Mossop and Hobson or its Oldfield road for us Maggie" Will takes complete charge of what is going to happen to the shop. He plans the changes he is going to make and doesn't take no for an answer from Hobson. In Conclusion I feel that Maggie is solely responsible for the change in Will. Since she dragged him into marrying her he has changed into a strong, self-confident and self-assured man. At the end of act 1 he shows that he won't be bossed about by Hobson and becomes determined to marry Maggie. He turns into the strongest man in the play from being the weakest. He now knows what he is doing in life and is not afraid of changes as he was at the beginning of the play. He is now successful and respectable but he doesn't gloat or boast over Hobson's misfortunes. At the end of the play he shows of all his new qualities. Will's change has happened for the best for him without a doubt but not for Hobson. Hobson used to be in charge of Will and boss him around but now the tables have turned as Hobson now needs Will. ...read more.