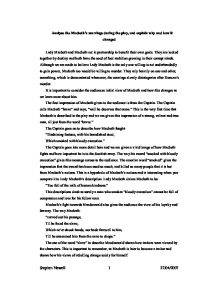 Analyse the Macbeth's marriage during the play, and explain why and how it changed

Analyse the Macbeth's marriage during the play, and explain why and how it changed Lady Macbeth and Macbeth act in partnership to benefit their own goals. They are locked together by destiny and both have the seed of foul ambition growing in their corrupt minds. Although we are made to believe Lady Macbeth is the only one willing to act underhandedly to gain power, Macbeth too would be willing to murder. They rely heavily on one and other, something, which is demonstrated whenever; the marriage slowly disintegrates after Duncan's murder. It is important to consider the audiences initial view of Macbeth and how this changes as we learn more about him. The first impression of Macbeth given to the audience is from the Captain. The Captain calls Macbeth "brave" and says, "well he deserves that name." This is the very first time that Macbeth is described in the play and we are given this impression of a strong, valiant and true man, all just from the word "brave." The Captain goes on to describe how Macbeth fought- "Disdaining fortune, with his brandished steel, Which smoked with b****y execution." The Captain goes into more detail here and we are given a vivid image of how Macbeth fights and how important he is to the Scottish army. The way his sword "smoked with b****y execution" gives this message across to the audience. The emotive word "smoked" gives the impression that the sword has been used so much, and killed so many people that it is hot from Macbeth's actions. This is a hyperbole of Macbeth's actions and is interesting when you compare it to Lady Macbeth's description. Lady Macbeth claims Macbeth to be- "Too full of the milk of human kindness." This descriptions clash as surely a man who smokes "b****y execution" cannot be full of compassion and love for his fellow man. Macbeth's fight towards Macdonwald also gives the audience the view of his loyalty and bravery. ...read more.

Next she taunts Macbeth's masculinity and calls him a coward- "Art thou afeared To be the same in thine own act and valour As thou art in desire?" Macbeth would have been deeply insulted by this. His rank and fame depend on his courage and bravery. If Macbeth were really a coward then all his fame would be a fraud. Of course, we know he is not a coward but this is an important approach by Lady Macbeth. Her next act of persuasion is by saying he cannot love her- "From this time Such I account thy love." Lady Macbeth is peaking in a masterful tone. The audience would have been shocked by this comment as we are given the impression of their relationship being extremely intense. This taunt really gets to Macbeth, but Lady Macbeth is not finished. I believe that Lady Macbeth had a child, however it died when it was very young. She uses the image of her child to represent how big of a sacrifice she would have made to make Macbeth king. She uses this terrible, violent imagery as a shock tactic- "I have given suck, and know How tender 'tis to love the babe that milks me: I would, while it was smiling in my face, Have plucked my n****e from his boneless gums And dash'd the brains out, had I sworn as you Have done to this." Lady Macbeth realises that Macbeth doubts about the murder must be overcome quickly. She recognises that it requires extreme measures, as Duncan is only staying one night and if they delay their chance would be away. Lady Macbeth's persuasion works quickly and it does not take long until he submits to her taunts, even though she has been so harsh on him- "I am settled and bend up each corporal agent to this terrible fate." This suggests Macbeth's moral views have been twisted into submission and bent to suit Lady Macbeth. ...read more.

They simply wanted to kill Duncan and that be it. They were foolish in thinking that Duncan's murder would be the end and as a result all of Macbeth's past heroics for Scotland will be forgotten and he will go down in history as a "butcher." Their marriage obviously deteriorates throughout the play. At the start they address each other with a great deal of affection and have an extremely intense relationship. Lady Macbeth was in control of the marriage and she was able to intimidate Macbeth into doing what she wanted. At this stage you would undoubtedly argue that Lady Macbeth was a "fiend" and whenever Macbeth carried out the murders of Duncan, Banquo and the Macduffs you could not deny he was a "butcher." After the murder, with the exception of the banquet scene, Lady Macbeth is sidelined form her husband. Macbeth's murders no longer include an input from Lady Macbeth and we start our opinions switch. We start to detest Macbeth and feel sympathy for Lady Macbeth. He suicide is a powerful statement about how her conscience has devoured her and that she could not rod her of the deed. Macbeth's response then shows us that he knows feel totally on his own and shows that he has lost passion for life. The Macbeth's may have been interlocked in their ambition, but they were also locked onto a path of destruction. They could not avoid their fate after they committed the first murder and as a result their marriage was doomed. The main difference is our opinions on the character. At the beginning we feel sympathy for Macbeth as he has a foul wife, but by the end we feel sympathy for Lady Macbeth as she has a foul husband. They were effective when they worked together on Duncan's murder, but they could not rid their conscience of the deed. They grew apart and were no longer a team. This lead to their inevitable, tragic deaths and the world going full circle by Malcolm's gaining of the throne. ?? ?? ?? ?? Stephen Newell 1 27/04/2007 ...read more.