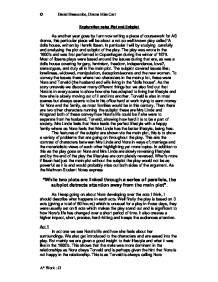 Exploration notes Plot and Subplot As another year goes by I am now writing a piece of coursework for AS drama, this particular piece will be about a not so well known play called 'A dolls house, written by Henrik Ibsen. In particular I will by studying carefully and analysing the plot and subplot of the play. The play was wrote in the 1800's and was first performed in Copenhagen during the winter of 1879. Most of Ibsens plays were based around the issues during that era, as was a dolls house covering forgery, feminism, freedom, independence, love?, stereotypes, and duty all in the main plot. The subplot covered issues like; loneliness, widowed, manipulation, deception/secrets and the new woman. To convey the issues there where two characters in the main plot, these were Nora and Torvald (the husband and wife living in the "dolls house". As the story unravels we discover many different things but we also find out that Nora is in every scene to show how she has adapted to living her lifestyle and how she is slowly moving out of it and into another. ...read more.

As I keep going on about Nora developing over the acts I think, I should describe what happens in each acts. Well firstly the play is based on 3 acts (giving a total of 60 hours) which is unusual for a play in those days, they were usually set on 6 acts which makes the play stand out and is significant to how Nora's life has changed over a short period of time. It also creates a higher impact, short, precise, hard-hitting and keeps the audiences attention. Act 1 In act one we see Nora's life and how she feels about her surroundings. We also get introduced to the characters and are eased into the play. But mainly we are given a good insight to their lifestyle and what it was like in the 1800's. This shows that the male was more dominant in the relationships as Nora obeys Torvald and is perhaps given the hint that Nora is not happy in the relationship. ...read more.

"You never loved me you only found it pleasant to be in love with me" (Nora) Because of the ending to the play in Germany Ibsen had to re-write the play with an alternate ending, as they did not want to show that women can be more powerful than men. The ending was that Nora broke down in tears and stayed after Torvald forcing her to see her children. The normal ending was described as an act of barbarous violence. Through researching and thoroughly studying the play act by act I have learnt that not only was the subplot just as important as the main plot but how they were run through each other and the impact it had. I also gathered more information on what life was like during the 1800's and how controlling the male was over the female during them times. The play also gave a great insight to how widowed and/or single adults were treated back in them days. So if you ever read the play I hope you enjoy it as much as I did and get a good understanding of all the key issues. (c) Daniel Bascombe, Drama Miss Carr A* Work :-D ...read more.