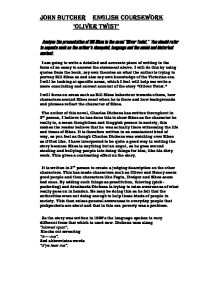 Analyse the presentation of Bill Sikes in the novel &quot;Oliver Twist.&quot; You should refer to aspects such as the author's viewpoint, language and the social and historical contest.

Analyse the presentation of Bill Sikes in the novel "Oliver Twist." You should refer to aspects such as the author's viewpoint, language and the social and historical contest. I am going to write a detailed and accurate piece of writing in the form of an essay to answer the statement above. I will do this by using quotes from the book, my own theories on what the author is trying to portray Bill Sikes as and also my own knowledge of the Victorian era. I will be looking at specific areas, which I feel will help me write a more concluding and correct account of the story "Oliver Twist." I will focus on areas such as Bill Sikes behaviour towards others, how characters around Sikes react when he is there and how backgrounds and phrases reflect the character of Sikes. The author of this novel, Charles Dickens has written throughout in 3rd person, I believe he has done this to show Sikes as the character he really is, a mean thoughtless and thuggish person in society, this makes the reader believe that he was actually there witnessing the life and times of Sikes. ...read more.

I believe this to be bold as Victorian authors were not supposed to acknowledge the shuddering reality of prostitution. Colloquial language is also present in the story with the phrases "as if you was ashamed" And "who pitched that ere at me", This was used by Dickens to represent the true speech of the Victorian era. Nancy is used to really show Sikes bad nature as she takes on a role of motherhood to the boys and like Oliver is only into this 'life' because she was not brought up knowing the difference between right and wrong I feel that during the story you see signs of her realising what a mess her life is, but by this time it is too late, so she tries to help Oliver and give him at least the chance to have a decent life. Points that back up my theory are the facts that she tries to help Oliver and feels sorry for him constantly. By showing Nancy as a mothering and caring person, we see Sikes as a bully, because he is the opposite too Nancy. ...read more.

But on the other hand were glad to see Sikes die in this way because throughout the story he has been abusive, selfish and brutal towards others and not forgetting the fact that he was a criminal, a kidnapper AND a murderer. Dickens may have also written about Sikes 'accidentally' hanging himself because if the hundreds of people who had gathered and were know after him, caught up with him, then he would of got hung by them in the town anyway. Why the chase is on to catch Sikes, hundreds of people hear of what he has done and want to see him brutally killed because they believe that it would be justice. "Each little bridge (and there were three in sight) bent beneath the weight of the crown upon it. Still the current poured on to find some nook or hole from which to vent their shouts, and only for an instant see the wretch". This shows how much Sikes was hated in his last few moments alive. I also believe that justice was done when Sikes died, he was a bully, a woman beater, a murderer, a kidnapper and both physically and verbally cruel to everyone he met. John butcher English coursework 'Oliver twist' ...read more.