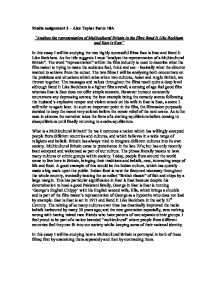 &quot;Analyse the representation of Multicultural Britain in the films Bend It Like Beckham and East is East&quot;

Media assignment 2 - Alex Taylor Form 10A "Analyse the representation of Multicultural Britain in the films Bend It Like Beckham and East is East" In this essay I will be studying the two highly successful films East is East and Bend It Like Beckham. As the title suggests I must "analyse the representation of a Multicultural Britain". The word "representation" within the film industry is used to describe what the film maker is trying to make the audience feel, think and see - basically what the director wanted to achieve from the outset. The two films I will be analysing both concentrate on the problems and situations which arise when two cultures, Asian and Anglo British, are thrown together. The messages and values throughout the films reach quite a deep level although Bend It Like Beckham is a lighter film overall, a coming of age feel good film whereas East is East does not offer simple answers. However humour constantly counteracts any depressing scenes; the best example being the comedy scenes following the husband's explosive temper and violent attack on his wife in East is East, a scene I will refer to again later. At such an important point in the film, the filmmaker purposely decided to keep the mood very solemn before the comic relief of the next scene. As is the case in sitcoms the narrative takes the form of a starting equilibrium before coming to disequilibrium until finally returning to a calm equilibrium. What is a Multicultural Britain? To me it connotes a nation which has willingly accepted people from different countries and cultures, and which believes in a wide range of religions and beliefs. Britain has always tried to integrate different cultures into its own society. Multicultural Britain came to prominence in the late 70's; but has only recently been accepted and welcomed as part of our culture. ...read more.

East is East portrays a Multicultural Britain in a positive light but also shows the uglier side of Britain in the 70's, where many had yet to fully accept people from different cultures. Both cultures are not as willing to integrate as in Bend It Like Beckham. The storyline revolves around one mixed race family living in an archetypal terraced home in the largely industrial and middle class area of Salford. The father, George, is a Pakistani who came to England 25 years before to make some money. He wants his six sons and one daughter to be good Pakistanis but the film shows how difficult this is because only one is a strict Muslim, the others enjoy the pleasures of English culture like eating bacon and having white girlfriends. The problem is that George left his first wife in Pakistan and the mother of his children is Ella, his English second wife. George still insists on an arranged marriage for eldest son Nazir and disowns him when Nazir refuses to go through with it. This does not stop George trying to arrange marriages for two other sons; he cannot see that his way of doing things is tearing the family apart. As I mentioned above, Ella is the victim of domestic violence, primarily deriving from the culture clash when George thinks she and one of his sons show disrespect to his Pakistani traditions. He does this to essentially keep his place as the dominant member of the household - male dominance is not as prominent in the western world as it is in Asian cultures, so when George does take his fist to Ella, it shows the contrast between the two cultures. The opening scene of East is East is of a Christian parade with the camera panned. People of many cultures are participating, including Ella and the children, who seem to feel at home socializing amid people from diverse cultures for the reason that they have a little British blood running through them. ...read more.

Integration is more visible in the 21st Century and this is mirrored by the contrast seen in East is East and Bend It Like Beckham. In this film r****m is by no means such a problem as in East is East. It is more to do with the boundaries and clashing religious beliefs in this Western world. Too many young Sikhs, including girls, playing football bare legged is not that big problem, as long as they adhere to the rules off the pitch. Only believers from the older generations feel that the traditions must be upheld so strictly. I believe we will gradually see this strictness fade out - in order to fully integrate British society. Bend It Like Beckham is a more feel good movie, whereas East is East is trying to make a statement and show the true reality of what life for a mixed race family involved during the 70's - hence the swearing, violence and 15 Certificate. Both films also show that British young people have many of the same problems as those from Asian families. Conflict with parents about wanting to push the barriers is found in every society; children everywhere tell their parents what they want to hear. All in all I believe the films do portray Britain in a different light, but only to reflect the changing times. East is East tries to make a political statement, asks more questions and is deeper because there is something quite nasty about George's hypocrisy and violence while Jess' dad is prepared to let her try and integrate, even though he himself gave up after the cricket team abuse. Both films use humour to get their point across and there are some stereotype events and characters in both films. Bend it like Beckham is more of a feel good movie with a nice ending while East is East does not answer the questions for those who go and see it. I would recommend both films. ______________ ...read more.